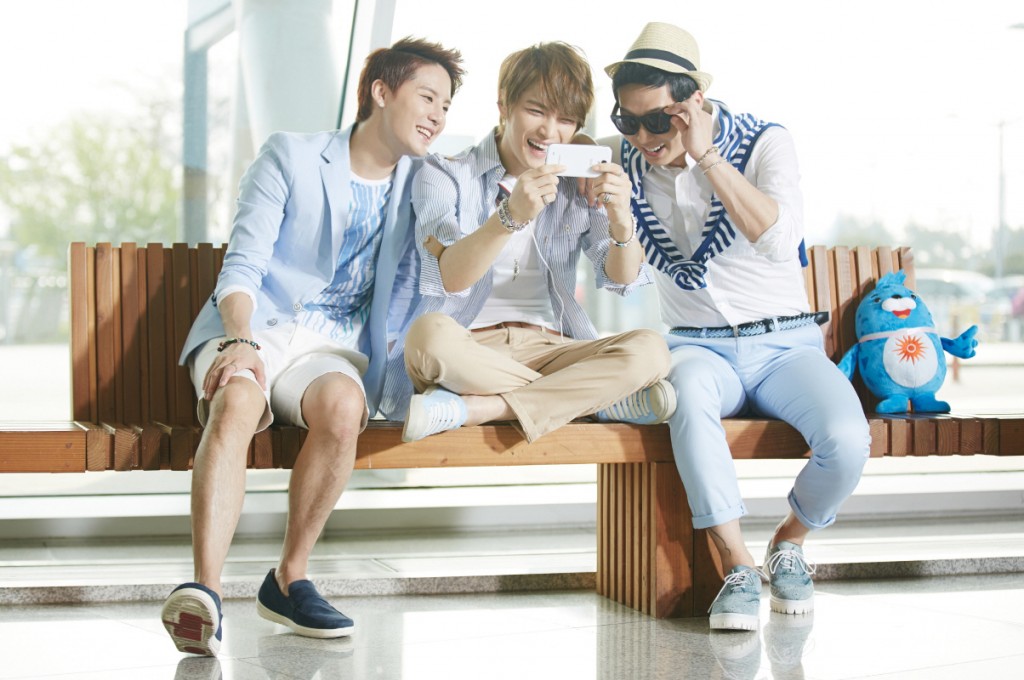 K-pop trio JYJ enjoying the video of the Incheon Asiad song ‘Only One’ uploaded on social media (image: BusinessWire)

INCHEON, South Korea, Sep 18 (Korea Bizwire)–  The 2014 Incheon Asian Games Organizing Committee (IAGOC) unveiled the  track and music video of JYJ’s Incheon Asiad song ‘Only One’ on  September 16th noon, approximately one year to go until the Asian Games  2014. The song is available in worldwide music charts, and its music  video can be found in the official YouTube page of the 2014 Incheon  Asian Games.

The song ‘Only One’ is characterized by a cheerful upbeat tune,  where the lyrics deliver supportive messages to overcome one’s fear and  challenges towards a brighter future. It also encourages people to  transcend cultural differences and share the mutual feeling of  determination.

Only One music video features JYJ at the various locations of  Incheon such as the eight consecutive award winning Incheon  International Airport, Incheon Munhak stadium built for the World Cup  2012, and the Incheon Bridge, South Korea’s longest spanning  cable-stayed bridge. The video visualizes the concept of bringing Asia  together while following the dances of the JYJ’s Incheon Asiad song via  social media.

“As the lyrics of Only One reignite feelings of great  sportsmanship, I hope that it will encourage many to join the victorious  moments at the 2014 Incheon Asian Games,” commented Kwon Kyung-sang,  Secretary General of IAGOC, “I would also like to express sincere  appreciation to the Ambassador JYJ for encouraging interest in 2014  Incheon Asian Games, and the Asiad song Only One.”

“It’s a great honor to be able to take part in the activities to promote  Incheon Asiad song and the games as official Ambassadors. We hope that  our track Only One resonate the spirit of Incheon Asian Games and  many people enjoy singing and dancing along the song,” said JYJ.

The K-pop trio JYJ will perform Only One for the first time in  Hanoi, Vietnam on the October 24, followed by another showcase in  Guangzhou, China on November 21. JYJ will also be joining the Asian  Games Centennial Festival in Boracay, Philippines end of November.