During a media showcase for the upcoming release, which was livestreamed from a music hall in Seoul, the band members said they are so thrilled to become finally able to make their debut.

“I’m nervous even now, facing our debut. It feels so unreal,” member O.de said. “I hope you will view us positively.”

Jungsu said he was both excited and thrilled about the upcoming moments but that the group will do its best to “present our own colors, which haven’t existed in the world before.” 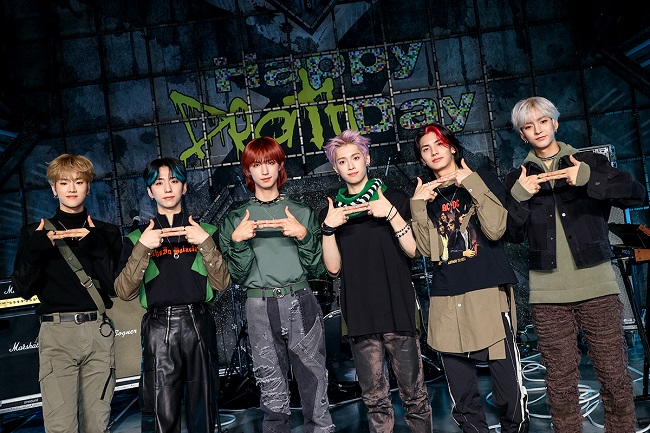 Xdinary Heroes poses for a photo during an online media showcase for its debut single “Happy Death Day” on Dec. 6, in this photo provided by JYP Entertainment.

The band name is short for “Extraordinary Heroes,” meaning everyone can become a hero, according to the group. It consists of six members — drummer Gun-il, keyboardists Jungsu and O.de, guitarists Gaon and Junhan, and bassist Jooyeon.

“When I first heard the name, I was worried it might be a little long and difficult to pronounce, but I (now) think the name is good, because people can easily become familiar with it and it seems to have become our group’s unique identity,” leader Gun-il said.

Talking about the title track, “Happy Death Day,” the band said it satirizes the duplicity of people who smile and extend words of celebration in front of others at a birthday party but change their facial expressions when they turn around.

Members Jungsu and Gaon took part in writing and composing the song.

The tune represents the bold thoughts of Generation Z, or those born between 1997 and the mid-2000s, about people exposing pretense and hypocrisy, the group added.