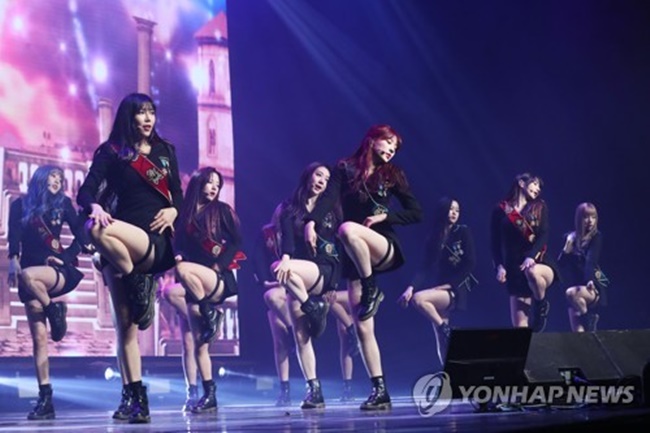 SEOUL, Feb. 27 (Korea Bizwire) – WJSN, the largest K-pop girl group, has come back with its first record in eight months, fronted by an energetic dance number that sings of the power of love.

The 13-piece South Korean-Chinese group held a media showcase for its new EP album, “Dream Your Dream,” at Yes 24 Live Hall in eastern Seoul on Tuesday.

Its latest album is fronted by “Dreams Come True,” a four-on-the-floor pop dance number that overlays dynamic string arrangements over powerful and trippy drum beats, taking a page from the early playbook of GFriend.

The lead song was written and arranged by production team Full8loom.

Long time WJSN collaborator, e.one, who has also previously worked on music for TWICE and GFriend, along with production group Avenjeonseung, also joined in the album, which comprises five tracks and a Chinese version of “Dreams Come True.”

“In this album we explored the theme of the power of love. … The album overall bubbles with emotions of hopes and dreams,” member Eunseo told reporters.

Main rapper and leader Exy agreed, adding, “In the past we used to touch mostly on subjects of romance and love.”

“As the title of the lead song suggests, we hope that our music can offer consolation to those who are swayed by whether they should pursue their dreams or not,” said Exy, who was heavily involved in the creative process of the album.

WJSN’s latest project came as it celebrated its two-year debut anniversary on Sunday. The ladies debuted with 12 members with the EP ”Would You Like?” in February 2016, with Yeongjung, a former Produce 101 contestant, joining last year.

The group will face off against other K-pop acts, most notably the popular R&B funk quartet Mamamoo, on the music charts.

“I think our color is a bit different (from other bands). We also have much to learn from other groups. So there isn’t necessarily a sense of rivalry,” Exy said. “I hope all of the groups fare well, given how we all prepared very hard for our comebacks,” Exy said.

Yeonjung noted the band’s 13-strong lineup as WJSN’s forte within the music landscape. “We have the biggest number of people, so our performance and formation is very extravagant.”