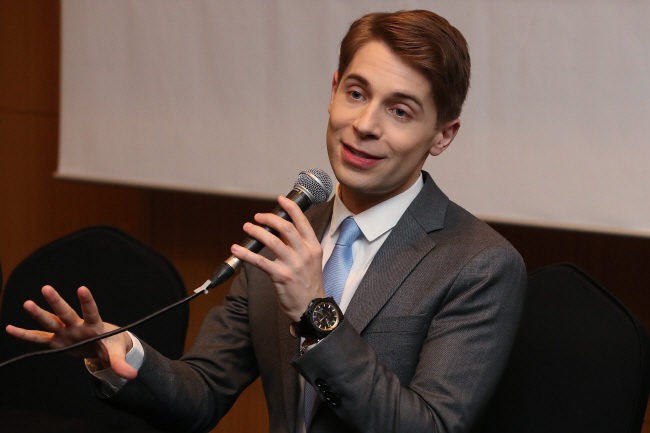 Jeff Benjamin speaks during a meeting with reporters on Jan. 14, 2020. (Yonhap)

“Definitely language is becoming less important in music that you listen to. It’s certainly becoming more about the artists, what their message is, what they show and what their talent is,” Jeff Benjamin said in a meeting with reporters on the sidelines of the annual Culture Communication Forum hosted by the Corea Image Communication Institute.

Benjamin is leading efforts to promote K-pop in the United States with his contributing articles to such popular music magazines as Billboard and Rolling Stone.

Recognizing such efforts, the Corea Image Communication Institute selected this year Benjamin as one of the three winners of the institute’s annual awards given to those who helped promote the overseas image of Korea.

The other two are Jazz singer Nah Youn-Sun and French-American professor Guy Sorman.

“The K part will become less emphasized but it’s going to be about the actual artist,” he said, stressing that the driver of K-pop’s global sensation is not the identity of the music, but the unique quality and message K-pop music carries with it.

“Remaining true to who you are and doing something different … I think that will be the thing that make (true musicians),” he said.

“Having messages that are different and unique is going to have larger impact on the music industry at large.”

The K-pop columnist also put the glittering stage performance of K-pop bands and their management agencies’ engaging marketing strategies as key attractions of K-pop music and the genre’s global success.

Benjamin also referred to the carefully orchestrated music marketing strategies by Korean music labels that often involve weeks of teaser images and video feeds before and after the actual music release, as well as social media communications with fans.

“It keeps people’s attention, and they get more excited … Having K-pop is good for young people, given how distracted they are these days,” Benjamin said.

“Among all things, the way music is released and produced is very important in terms of how it’s consumed in the larger music industry.”

Asked to pick some of the most promising K-pop idol bands for the New Year, he named Ateez, an eight-member boy band, as well as Stray Kids, (G)I-dle and ITZY.

“I am watching Ateez. They have strong message and really strong Western reaction,” he said. The band is lesser known in South Korea, but eventually the domestic reaction will catch up with the wild Western reaction, he predicted.

This year, Benjamin also plans to publish a book recounting K-pop’s journey to global prominence through a lens of a foreigner. He is also planning to launch a website dedicated to discussion on K-pop.

“One of my biggest goals is to think how can we expand K-pop in different ways. I don’t see a lot of people giving the same attention and respect they give to other music. I am interested in having effective and meaningful discussion (about that).”