The seven SuperM members showcased their first album, titled “SuperM,” in a media event Wednesday ahead of the band’s official global debut in Hollywood on Saturday.

SuperM was formed jointly by SM and CMG in an ambitious project to smash the American music scene with globally trendy K-pop music.

The seven members hail from multiple K-pop bands under the wing of SM, the biggest K-pop talent agency in South Korea, including SHINee, EXO, NCT 127 and WayV.

The septet will officially premiere the first album on an outdoor stage in front of Capitol Records Tower in Hollywood, Los Angeles, on Saturday after releasing the album on major music streaming sites Friday evening (Korean time).

The main track of the much-anticipated album is “Jopping,” a newly coined word that combines jumping and popping.

The thudding electric pop music puts together SM’s storied music-producing experiences and the rounded stage performances of the seven SM artists whose combined career in the K-pop scene reaches some 25 years.

“Having worked for a long time in the K-pop scene, it feels like a dream to make inroads in the U.S.,” Taemin of SHINee told reporters.

“When (SHINee) debuted in 2008, we often traveled to perform in Japan, China or other Asian regions. But during our rare performances then in the U.S., it was marvelous (to see) Western people enjoy our culture and music. It is dreamlike to go to a market like that,” he said. 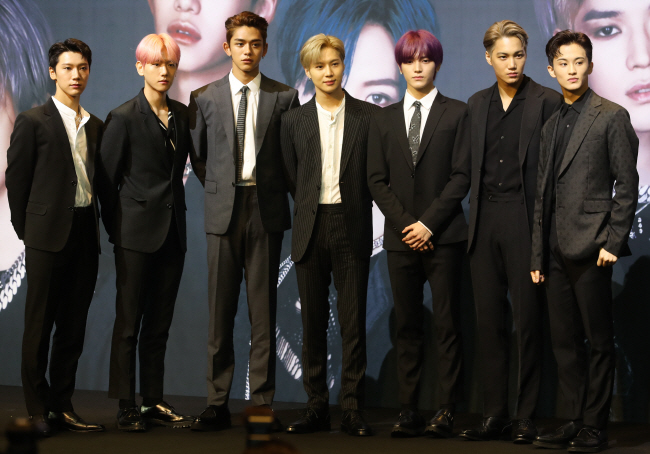 EXO member Kai said the seven members were handpicked by SM chief Lee Soo-man out of the pool of SM artists.

Team leader Baekhyun, an EXO member, said SuperM aims to entertain the eyes and ears of fans by creating synergy between the members from the different groups.

“In terms of duration, we together have many years of experiences behind us,” according to Baekhyun. “I myself was very impressed by how well we could mix together as a team while we exercised for the album. It will be ‘super synergy’ to entertain the fans.”

“I am excited about and proud of introducing Korean content to the U.S.’ Hollywood. SuperM will be the first step in (SM’s) global culture universe plan that will bring together Asian and Western culture,” SM chief Lee said in a video message delivered during the media showcase Wednesday.

“I Can’t Stand the Rain” is one of the only two tracks that involve all seven SuperM members. The other one is the main track, “Jopping.”

The remaining three tracks — “2 Fast,” “Super Car” and “No Manners” — were recorded by different subunits of the band that also include Taeyong and Mark from NCT 127 and Lucas from WayV.