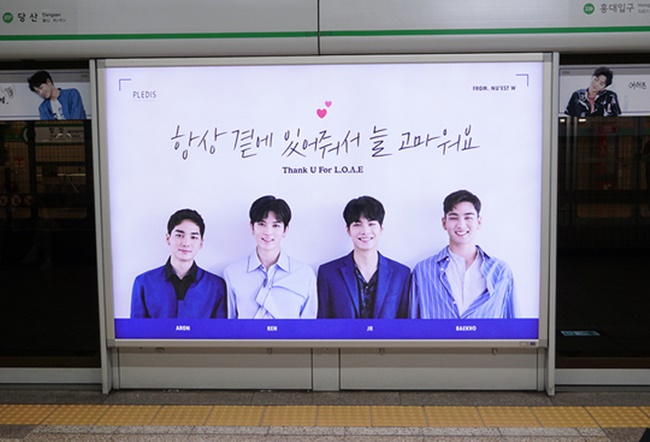 Fans are actually paying out of pocket to send messages across subway stations in admiration of their favorite celebrities.(Image: PLEDIS Entertainment)

As typical messages accompanying the advertisements often include ‘Thank you for having been born,’ or ‘Happy Birthday’ followed by the name of an idol star, the purpose here isn’t really to promote albums or concerts, but to either celebrate a birthday, achievement or sometimes, just to show how appreciated they are.

Fans are actually paying out of pocket to send messages across subway stations in admiration of their favorite celebrities.

Known as the ‘fandom culture’ in South Korea, fans of pop idol groups are known for their rather peculiar and extravagant ways of showing appreciation for their favorite artists.

From sending luxurious lunch boxes and coffee trucks to TV show sets featuring their favorite idols, with the hopes that other cast members have a favorable view of their idol star, or more traditionally, sending gifts with the hope of being recognized.

However, fans are taking it one step further with advertisements in public spaces, with singer Daniel Kang’s happy birthday message advertisement at Times Square in New York being the latest example.

According to data from Seoul Metro, advertising spaces sold to idol fans accounted for 7.6 percent of all ads in July this year, amounting to over 80 million won.

The phenomenon of idol advertisements was first observed around 2010, but has notably increased in popularity over the past two years, a source close to Seoul Metro said.

Over 1 in 10 advertisements in Seoul subway stations were related to idols this year, during which the second season of hit audition show PRODUCE 101 was coming to an end, prompting fans from online communities to splash out on billboards at busy subway stations to show their last minute support. 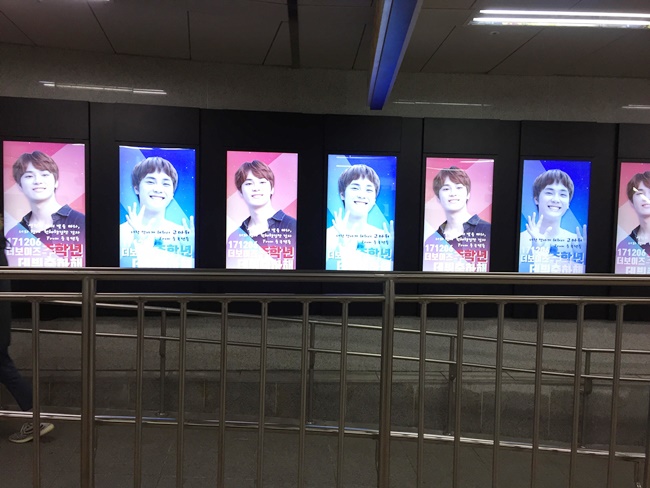 Given that most fans are teenagers, the advertisements are primarily funded by small donations within online idol communities, followed by a voting process to decide on details including the location and the scale.

Data released from Seoul Metro earlier this year shows that Samseong Station and Hongik University Station were among the most popular venues for idol ads, as they are among the busiest stations in the country, with tens of thousands of commuters passing through every day.

What keeps the fans going is that idol stars are now showing appreciation in return by posting pictures of themselves standing next to advertisements on social media.

“I only contribute a small amount of money, but it’s nonetheless satisfying when we see the funding grow and we can finally give our stars a present,” said one fan who has taken part in public space advertisements.

“It makes me proud and happy when the gifts reach my favorite idol and I can hear their acknowledgement,” another fan said. 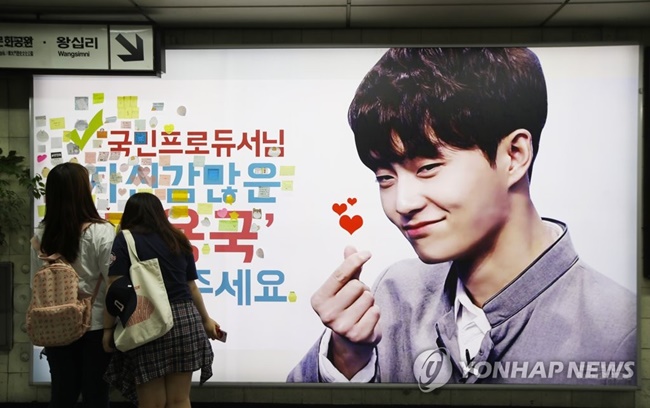 According to data from Seoul Metro, advertising spaces sold to idol fans accounted for 7.6 percent of all ads in July this year, amounting to over 80 million won. (Image: Yonhap)

However, the culture of ‘jogong’, a term used to refer to K-pop fan groups giving expensive gifts and advertising their favorite stars’ birthdays, has caused controversy and drawn criticism for exorbitance.

A number of celebrities have been accused of giving away gifts after die-hard fans thoroughly scrutinized pictures uploaded on social media, while claims have also been made that some entertainment agencies take the practice for granted and ask fan groups to pay for staff members’ meals.

Earlier this month Tiffany, who is a member of K-pop group Girls’ Generation, found her name projected onto Taipei 101, after a local woman spent an alleged 140 million won to publicly make a marriage proposal to show off her support and love for the singer.