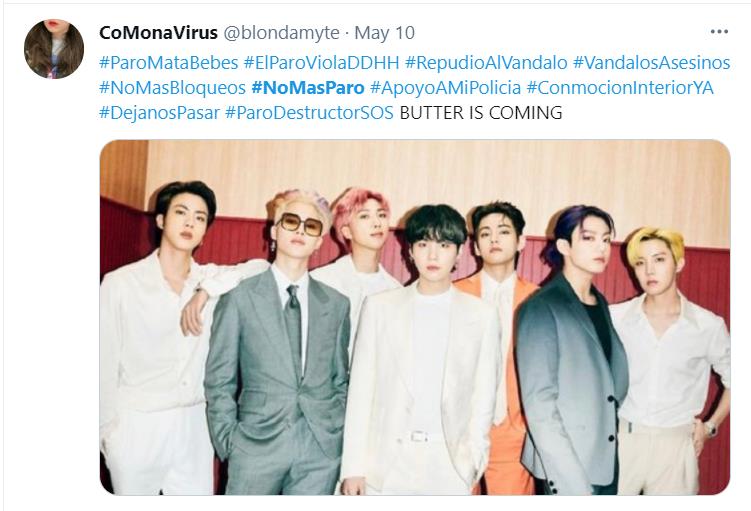 This photo, captured from the Twitter account of a Colombian K-pop fan, shows a photo of BTS with hashtags that oppose the strike.

SEOUL, May 18 (Korea Bizwire) — Photos and videos of K-pop stars are sweeping across Twitter as Colombia continues to struggle with a nationwide strike that has been in place for more than 20 days.

Each post comes with the hashtags, “no more strike”, “we support the police” or “stop the blockade”.

At first, it may seem like K-pop fans are opposing the general strike in Colombia in support of the police. However, it is actually the opposite.

Colombian media outlets have reported that a single tweet posted by former Colombian president Alvaro Uribe early this month has led to the rise of the ‘K-pop fans’.

Uribe, who has also been a mentor to Colombia’s incumbent president Ivan Duque, tweeted that he supports the military police’s use of weapons against protesters.

The ongoing strike in Colombia has caused the death of more than 40 civilians due to police violence, sparking criticism in the international community for excessive use of force.

Fearful of the former president and the thought that his ardent supporters could overturn the public opinion against the protest, K-pop fans began to intervene.

K-pop fans posted hashtags that said “Uribe is right”, “Uribe’s voice is our voice” or “We support the police”, not because they actually support Uribe’s claims, but to ‘sabotage’ efforts to overturn public opinion against the protesters.

Thanks to the fans, anti-protest hashtags shot up in popularity, but what netizens saw once they clicked on the hashtags weren’t photos or videos of those supporting the police, but those of K-pop stars.