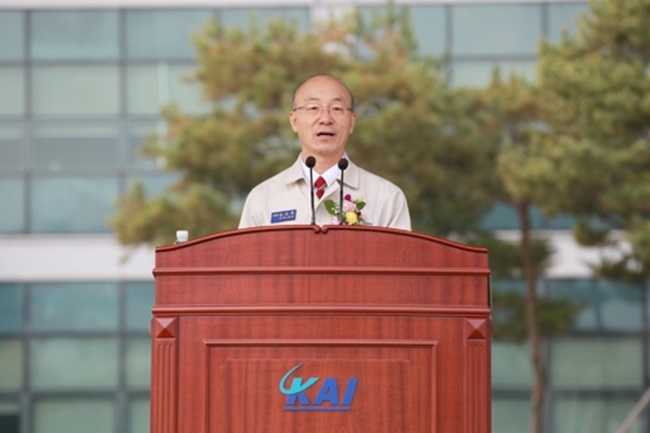 In this photo taken on Oct. 26, 2017, KAI CEO Kim Jo-won delivers a speech to employees at the company’s headquarters in Sacheon, South Gyeongsang Province. (Image: KAI)

KAI held a board meeting on Wednesday to appoint Kim Jo-won, who worked at the Board of Audit and Inspection of Korea for 20 years, the newchief of the aircraft company, a company spokesman said.

Kim, 61, began his three-year term as CEO on Thursday and vowed to make utmost efforts to keep the company’s business unscathed from the scandal, particularly in exporting Korean-made aircraft, he said.

The company will launch a “management innovation” task force team for transparency and trustworthiness next month and explore new growth drivers to achieve an ambitious sales target of 20 trillion won (US$17.7 billion) by 2030, he said.

His appointment comes weeks after former president Ha Seong-yong, 66, was indicted on charges of his involvement in accounting fraud, embezzlement and bribery.