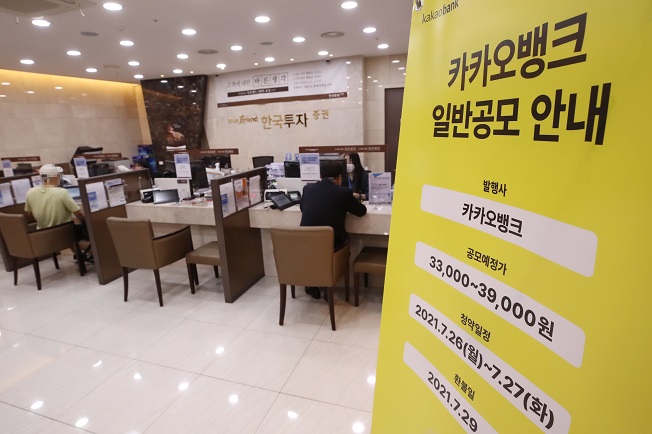 In this file photo, a retail investor submits his subscription at Kakao Bank Corp.’s IPO event held at a local brokerage in central Seoul on July 27, 2021. (Yonhap)

After a weak start, shares of the online bank made steady gains throughout the session.

Their deposits for the stock offering stood at a smaller-than-expected 58.3 trillion won, with average subscription rate of 182.7:1, according to its IPO managers.

The lower-than-estimated deposit came as subscriptions to multiple brokerage houses were banned, in contrast to the cases for SKIET and SK Bioscience.

Controversy over the overvaluation of the IPO price also made investors hesitant on the firm’s first trading day on the bourse.

Launched in January 2016, Kakao Bank has gained popularity among mobile-savvy customers in recent years thanks to its around-the-clock service and convenience.