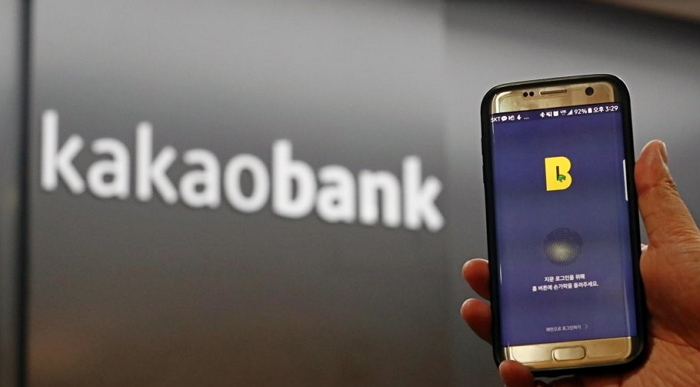 Kakao Bank, launched in late July with paid-in capital of 300 billion won, has attracted about three million accounts and extended loans worth 1.4 trillion won as of Aug. 27. (Image: Yonhap)

Kakao Bank, launched in late July with paid-in capital of 300 billion won, has attracted about three million accounts and extended loans worth 1.4 trillion won as of Aug. 27.

The capital hike was made by issuing 100 million new shares worth 5,000 won each.

Major shareholders of Kakao Bank, including Korea Investment Holdings Co. and Kookmin Bank, were said to have subscribed to the capital increase, according a market source.

The bank’s rival, K-Bank, which was launched in April with paid-in capital of 250 billion won, said last month that it will raise 100 billion won by issuing new shares.

However, some shareholders of K-Bank, led by KT Corp., the nation’s largest fixed-line telecom operator, have shown a lukewarm response to the capital-hike plan.

If some shareholders fail to subscribe to the capital hike, KT will buy the forfeited shares. However, KT already owns an 8-percent stake in K-Bank, limiting the amount of new shares it can purchase.