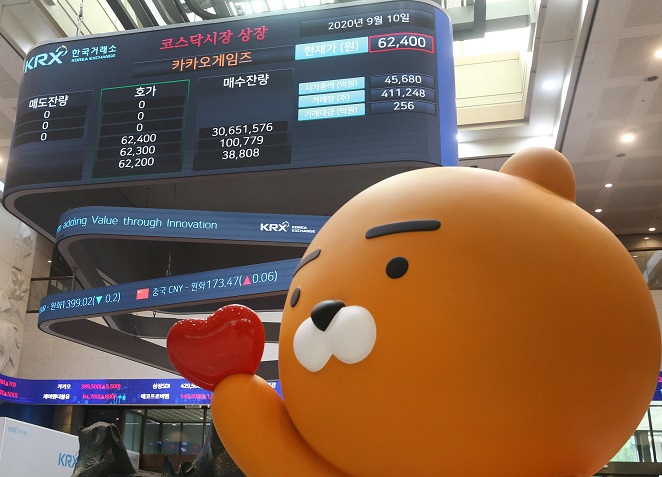 Its market capitalization amounted to 4.6 trillion won, the fifth largest on the secondary, tech-laden KOSDAQ market.

The game publisher raised some 384 billion won via the IPO.

Prior to its IPO, investors rushed to Kakao Games for its growth potential amid the coronavirus pandemic. They chipped in 58.5 trillion won in deposits to buy its stocks, the largest in the country’s IPO history.

In the first half of this year, its operating profit came to 28.7 billion won, up 63.7 percent from a year earlier.

The gaming company plans to use the proceeds from the IPO in developing about a dozen new games, including Elyon and Odin.

The firm is pushing to launch the two large-scale massively multiplayer online role-playing games (MMORPG) by the end of this year.

Kakao Corp. owns the largest 58.96 percent stake in Kakao Games, which has been broadening its presence not only in South Korea but across Asia with the help of KakaoTalk after its inception in April 2016.

“Kakao Games is expected to log gains in the short run thanks to the estimate-beating performance of its latest project Guardian Tales and the upcoming launch of Elyon and Odin,” said SK Securities analyst Lee Jin-man.