SEOUL, May 7 (Korea Bizwire) — Kakao Corp., the operator of South Korea’s top mobile messenger KakaoTalk, said Thursday its first-quarter net profit jumped nearly four times from a year earlier on the back of robust growth of its e-commerce services based on its messenger platform.

Net profit reached 79.9 billion won (US$65.4 million) in the January-March period on a consolidated basis, compared with 17.6 billion won a year earlier, the company said in a regulatory filing.

The company attributed the stellar performance to the robust growth of new services, such as payment and e-commerce, linked to its mobile messenger KakaoTalk.

“More people used group calls and video calls mainly on the back of the social distancing campaign,” Yeo Min-soo, co-CEO of Kakao, said in a conference call. “This trend continues through the second quarter.”

Yeo said its platform businesses based on KakaoTalk, including Talk Biz Board, are expected to show brisk performance down the road. At Talk Biz Board, individual sellers can sell their products through a platform connected to KakaoTalk.

“We believe we can positively achieve accumulated sales of over 1 trillion won through Talk Biz,” Yeo said. 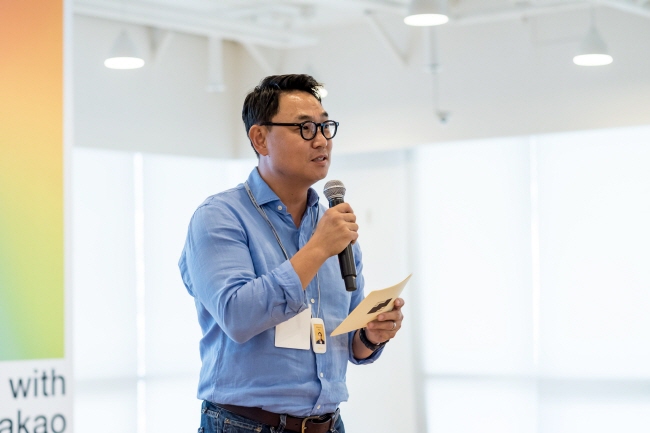 Kakao said the revenue from its platform business surged by 41 percent on-year to 442 billion won over the cited period on the back of steady growth of Biz Message.

Total transactions from the e-commerce business that includes online stores and gift services also surged by 55 on-year during the cited period.

Revenue from the content business also expanded by 8 percent on-year to 426.6 billion won in the first quarter.

Revenue from its new businesses, such as Kakao Mobility and Kakao Pay, also skyrocketed 67 percent on-year to 100.5 billion won during the cited period, officials said.

Kakao also said it will continue to beef up its platform businesses based on KakaoTalk, including Talk Board.

Shares of Kakao closed at a 52-week high of 206,000 won on the Seoul bourse, up 3.26 percent from a day earlier. The earnings were announced before the local market opened.