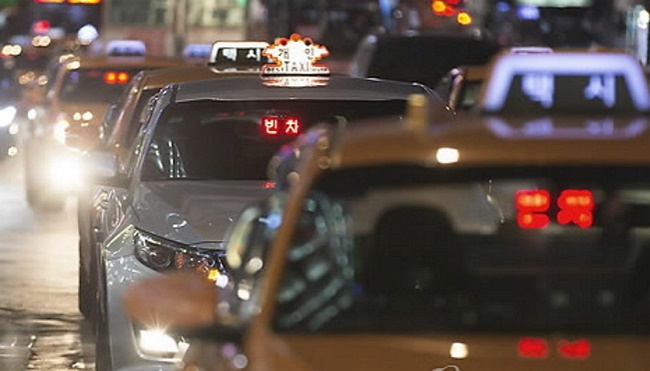 The new directives will be implemented after KakaoTaxi modifies its algorithms to give benefits to drivers willing to take customers to short-distance destinations. (Image: Yonhap)

SEOUL, Nov. 28 (Korea Bizwire) – KakaoTaxi has announced plans to offer incentives to drivers who take short-distance trips as part of efforts to crack down on those who choose customers selectively depending on their destination.

According to IT industry officials, the major taxi hailing app KakaoTaxi is working together with the Seoul Metropolitan Government to introduce a number of countermeasures against dishonest taxi drivers, including penalties for those who deliverately refuse to take calls from customers.

With the new measures put in place, taxi drivers who have an established history of short-distance trips will get priority when it comes to the allotment of passengers on long-distance journeys, while those who have been found to refuse passengers habitually will be deprived of customers for a certain period of time as punishment.

The new directives will be implemented after KakaoTaxi modifies its algorithms to give benefits to drivers willing to take customers to short-distance destinations.

KakaoTaxi’s latest move is being seen as a new way of pressuring drivers into welcoming all passengers with open arms if they wish to take passengers on long-distance trips.

Prizes such as gift cards will also be deployed to encourage drivers with a good work ethic, while a number of customer refusals will be recorded to identify and weed out troublesome drivers whose business opportunities will be severely hindered as a result of such actions.

The Seoul Metropolitan Government had asked KakaoTaxi to do away with the feature that shows a passenger’s destination for drivers, but the company refused, saying that hiding destinations won’t effectively tackle the issue of taxi drivers taking selective passengers for better profitability.

Though the new move is taking effect within Seoul alone, KakaoTaxi could introduce similar measures in other cities like Incheon, if they prove effective.

According to data put forward by lawmaker Kim Sung-tae, 174 reports of KakaoTaxi drivers refusing to take passengers have been filed between January and August this year, up more than three times compared to 2015.