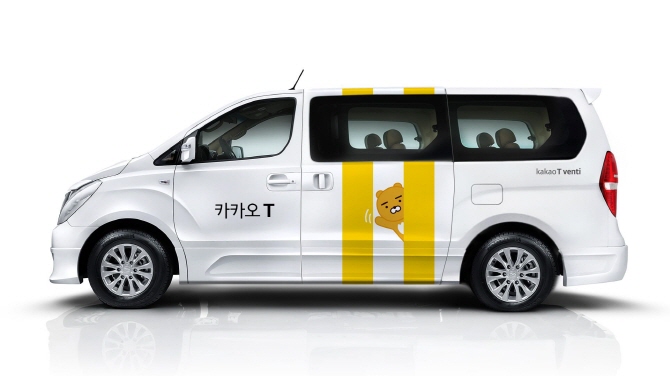 When using the Kakao T app to hail a taxi, the app informs the user via a pop-up screen if there is an available Venti cab nearby. (image: Kakao Mobility)

Kakao Mobility, the transportation arm of Kakao, announced on Wednesday that it will begin testing the new Kakao T Venti service.

The new service will first begin in Seoul, with 100 vans each capable of carrying up to 11 passengers. During the trial period, fares will be set at a cheaper rate than other commercial van taxis.

When using the Kakao T app to hail a taxi, the app informs the user via a pop-up screen if there is an available Venti cab nearby. The user can simply ignore the message if they choose.

Kakao Mobility has been recruiting drivers since August of this year, working with the Seoul Metropolitan Government to certify its fare meter system and complete other preparatory tasks.

Venti will first start off as a beta service, gradually expanding its operations based on customer feedback.

With Tada on the brink of a shutdown following the amendment of the Passenger Transport Service Act, Kakao’s new van-hailing taxi service is expected to have yet another impact on the mobility market.

Unlike Tada, a rent-a-car mobility sharing service that has been struggling with a clash of interest of the taxi industry, the government, and the National Assembly, Kakao’s Venti adheres to the conventional taxi license system, which poses no threat to existing conventional taxi services.