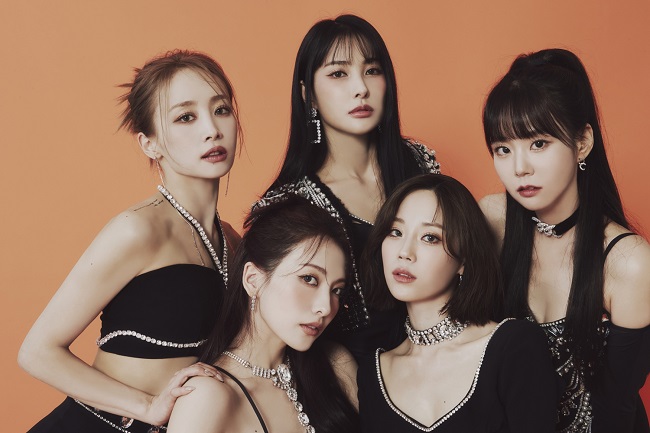 Girl group KARA is seen in this photo provided by its agency, RBW.

SEOUL, Nov. 29 (Korea Bizwire) — KARA, a K-pop girl group that was hugely popular in South Korea and Japan, will be back Tuesday with its first release in 7 1/2 years, the band’s agency said.

It marks KARA’s first whole-group project since May 2015, when its seventh EP “In Love” came out. “Move Again” will involve members Gyuri, Seungyeon, Youngji, as well as Nicole and Jiyoung, who both left the group in 2014.

Debuting in 2007, the group had been one of the top second-generation K-pop girl groups, along with Girls’ Generation, with hit songs such as “Pretty Girl,” “Mister,” “Honey” and “Lupin,” before practically being disbanded in January 2016.

It also garnered a large following in Japan after “Mister” became a big hit in the country.

According to the agency, the band made the album to repay support from its fans, as this year marks the 15th anniversary of its debut.

“All members participated in the songwriting and album production to complete a work that has KARA’s unique color,” it said.

“I thought it will be almost impossible (to reunite as a group),” Seungyeon said through the agency.

“I thought we should try to make the event the smallest thing we can do together this year, and have come this far … I still cannot believe this, and feel proud of my bandmates and fans.”

Nicole said the album felt all the more special to the band because its members cared about the whole process of making it.

“I wanted to give a better album as a present to fans because of the hiatus. I can’t wait to perform the album’s songs, curious how they will be received by fans,” she added.

The upcoming album has four songs — the main single “When I Move,” “Happy Hour,” “Shout It Out” and “Oxygen.”

“When I Move” is an addictive song combining intense rhythm and the bandmates’ powerful vocals.

Jiyoung participated in writing and composing the song, while Nicole wrote the Korean-language part of its lyrics.

The group will take the stage of the 2022 MAMA Awards, a year-end music awards show hosted by local cable channel Mnet, in Osaka, Japan, on Tuesday night, for the first live performance of the song.