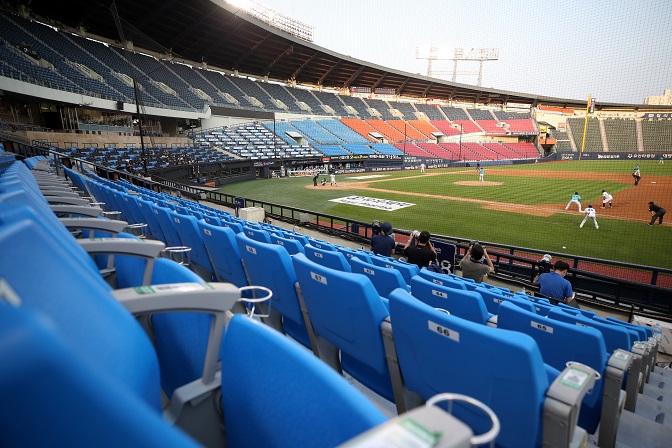 A Korea Baseball Organization regular season game between the NC Dinos and the Doosan Bears takes place without fans at Jamsil Baseball Stadium in Seoul on June 28, 2020. (Yonhap)

SEOUL, July 1 (Korea Bizwire) — The South Korean baseball league may have to wait a few more days before reopening its stadiums to fans again due to a recent spike in novel coronavirus cases in a southern metropolitan city.

Gwangju, located 330 kilometers south of Seoul and home of the Kia Tigers in the Korea Baseball Organization (KBO), raised its social distancing intensity from Level 1 to Level 2 on Wednesday.

Under the government’s three-level social distancing scheme unveiled Sunday, Level 1 entails a situation where the number of daily COVID-19 cases sits in the 50 or fewer range, manageable by the medical system.

With 12 new cases reported Wednesday, Gwangju raised its social distancing intensity to Level 2, under which all indoor gatherings of 50 or more and outdoor meetings of over 100 are prohibited.

Since the first outbreak there in February, Gwangju had never seen virus cases reach double-digit figures until Wednesday.

The city will allow the Tigers and the K League 1 football club Gwangju FC to continue to play their home games without fans for the next two weeks.

Over the next 14 days, the Tigers will play home games on Wednesday and Thursday, and a six-game home stand from July 7 to 12. Gwangju FC’s lone home match between now and July 15 will be on Sunday.

The social distancing grade will not be applied on a national scale, meaning regions that are hit harder by the virus than others will be able to adjust their level accordingly.

The government announced on Sunday that sports stadiums will open on a limited basis as long as teams ensure safe environments and viewing experiences for fans. 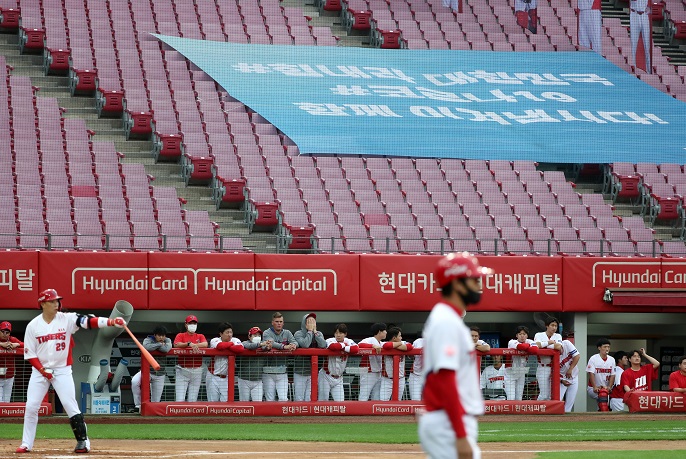 In this file photo from June 3, 2020, the Kia Tigers take on the Lotte Giants during a Korea Baseball Organization regular season game without fans at Gwangju-Kia Champions Field in Gwangju, 330 kilometers south of Seoul. (Yonhap)

The KBO was hoping to swing open the gates by Friday, while the K League was targeting July 10 for the return of supporters.

That weekend announcement was a much-needed relief for pro sports teams that have been dealing with financial challenges without any gate revenue.

Ryu Dae-hwan, secretary general of the KBO, said the league may go ahead and open up stadiums in cities other than Gwangju, but even that will have to remain on hold for now.

Ryu said the KBO hasn’t yet received the go-ahead sign from the government. National health authorities will determine the size of crowds permitted at ballparks in the initial stages — likely around 30 percent of the stadium capacity — but they may also be wary of rising local infections at the moment.

To finalize the online ticketing process and quarantine steps, the KBO needed to hear back from the national health authorities by Wednesday.

“We respect Gwangju’s decision to put the safety and health of its community above all else,” Ryu said.

“As we wait for the government’s announcement, all 10 clubs in the league understand that, the longer they play without fans, the direr their financial hardships become.”

The KBO hopes to reopen the gates on a Tuesday for the beginning of a midweek series or a Friday for the start of a weekend series.

The league released a health and safety manual for fans, asking them to, among other things, sit apart in the stands and refrain from eating in their seats.