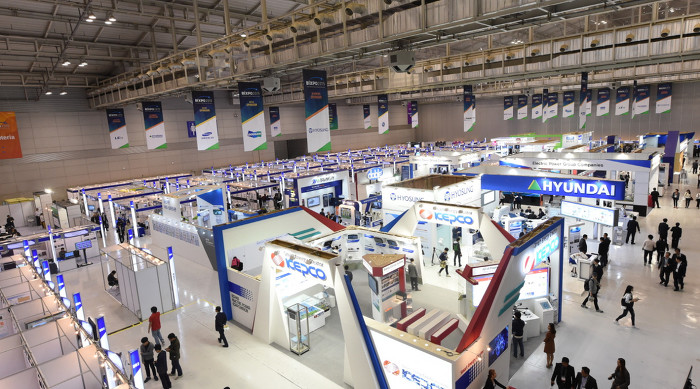 GWANGJU, Nov. 1 (Korea Bizwire) — Global electric power experts and engineers gathered in South Korea on Wednesday to exchange views on the future of the power industry at an exhibition hosted by the state-run Korea Electric Power Corporation (KEPCO).

The Bitgaram International Exposition of Electric Power Technology (BIXPO) kicked off its three-day run in Gwangju, 330 kilometers south of Seoul.

Held under the slogan “Connect Ideas, Meet the Fourth Revolution,” the third annual exhibition is the largest to date, bringing together about 3,000 senior officials and engineers from 268 companies representing 40 countries. They include Siemens, GE, Nokia, HP and Microsoft, KEPCO said.

A total of 668 booths have been set up to highlight the latest technologies, including artificial intelligence, big data, robots, drones and other innovative gadgets.

“Looking at the rapidly evolving technology, we are dreaming of a new future,” KEPCO CEO Cho Hwan-ik said at the opening ceremony held at Kimdaejung Convention Center. “This year’s exhibition will present all kinds of electric power services to showcase the future of the industry.”

Chief executive officers and chief technology officers from global companies will attend 38 conferences to discuss ways to embrace the fourth industrial revolution and step up collaboration.

About 500 investors, start-up company CEOs and officials from 16 cities will participate in the “Smart City Global Leader’s Summit” later in the day to share new ideas on the global inter-city platform and sustainable development goals.

Don Tapscott, CEO of the Tapscott Group and a leading futurist, will give a special lecture under the theme “Blockchain in the fourth industrial revolution and prospects of the energy industry.”

On the sidelines of the event, KEPCO held meetings with senior officials from several nations, including the U.S., France, Germany and Gambia, to expand its global business network.

The firm also signed an MOU with the Korea Smart Grid Institute to develop smart grid technology and establish the infrastructure in the private sector.