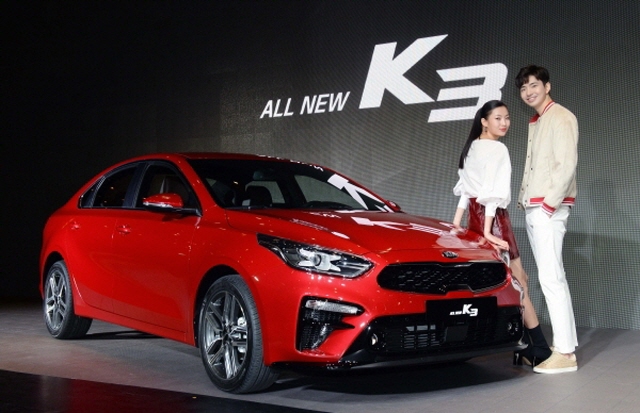 Kia Motors said its target is to sell 50,000 units domestically and to export 100,000 vehicles to places like the United States and emerging markets.

Kia said it plans to launch the new model in its home market on Feb. 27 and in the U.S. just before the start of the summer vacation season.

The new K3 is an “extremely important” model for Kia as the company aggressively strives to boost sales in the U.S. and emerging markets this year after posting poor performances last year, company executives said.

The K3, the first full-change model in six years, comes with a 1.6-liter gasoline engine mated with a continuous variable transmission and has a rated fuel economy of 15.2 kilometers on a liter of fuel. The car’s starting price here is upwards of around 16 million won (US$15,000), depending on features, the company said in a statement.

The compact sedan comes with a “dynamic exterior” design and useful features throughout the interior. It is also equipped with such safety features as front collision avoidance, blind-spot collision warning and driver attention warning systems, the statement said.

Kia has sold 2 million K3 units globally since its launch in 2012.