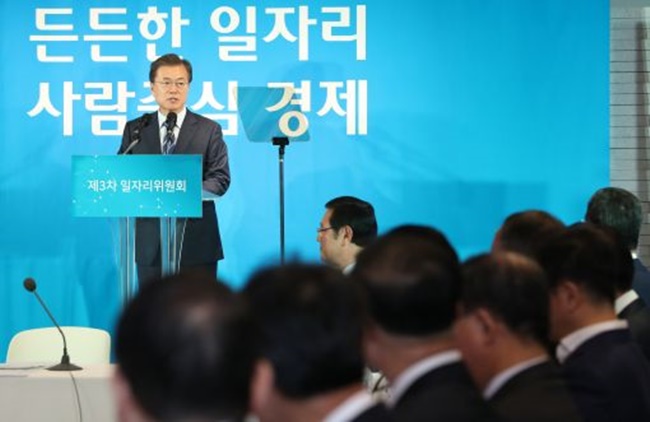 “First, (the government) will work to create new jobs in areas related to public safety, security and social welfare,” the president said in a meeting of the Presidential Committee on Job Creation in Seoul. (Image: Yonhap)

“First, (the government) will work to create new jobs in areas related to public safety, security and social welfare,” the president said in a meeting of the Presidential Committee on Job Creation in Seoul.

He said the government will recruit 174,000 new public workers, including police officers, firefighters and noncommissioned military officers, during his presidential term.

An additional 340,000 new jobs in the social service sector, including childcare and nursing homes, will be created before his single five-year term ends in 2022, he added.

“Protecting the lives of people and the environment is one of the most basic responsibilities of the government. However, our number of positions in the public sector that are tasked with such jobs currently are less than half of the OECD average,” the president added.

He also stressed the need to create new quality jobs in the private sector.

“Jobs in the private sector will be created through innovation-led growth. The government will push for policies that will make sure new startups and a new industry will lead to growth, which in turn will lead to many new jobs. It will provide support to companies that face challenges through creativity and innovation,” he said.

Such support will include more paid leave for government employees, including professors and researchers, who seek to start new venture firms.

“The government will encourage them to more actively start new businesses by linking their roles in new startups to their performance evaluation. It will also revise the legal system to make it easier to start a new business,” Moon told the meeting, according to pool reports.

The president also underscored the importance of social enterprises, calling it a great “solution” to many problems facing the country, such as growth without employment and economic polarization.

“Social firms cannot but lag behind ordinary private companies in terms of competitiveness if we view them only in terms of price and efficiency. That is why social values must be reflected as a key factor when the government or public firms consider new policies,” he said.

The president promised additional support for social firms, including priority when bidding for government acquisition deals.

“Creating quality jobs is a way to improve the quality of people’s lives while moving toward a just society that respects labor,” Moon said.