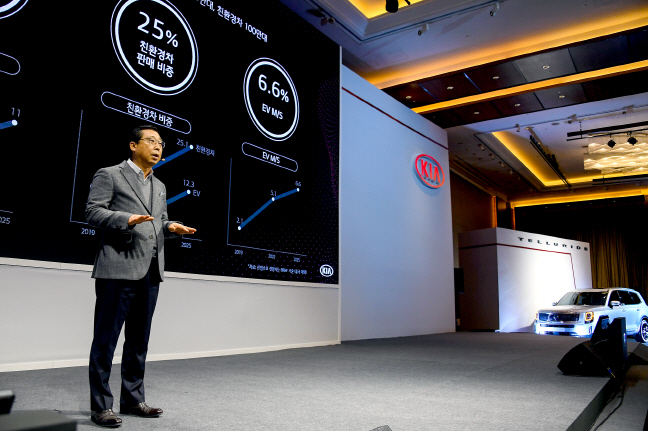 Kia Motors CEO and President Park Han-woo delivers a briefing on its investment plans in the next six years for future mobility technologies at its investor relations session held at Conrad Hotel in Yeouido, Seoul on Jan. 14, 2020. (image: Kia Motors)

Kia Motors made the announcement as it aims to transform itself into a leading electric vehicle manufacturer while reducing the ratio of combustion engine vehicles it makes.

“We are not simply adapting to changes in the automobile market but adopting innovation to make a leap forward to become a leading player (in next-generation vehicles) through a bold and preemptive transition in business portfolio,” Kia Chief Executive and President Park Han-woo said at an investor relations session in Seoul.

With the planned investments, Kia aims to increase the number of all-electric models in its lineup from the current two to 11 and achieve a share of 6.6 percent of the global EV market in 2025, up from the current 2 percent, the company said in a statement.

In 2021, Kia plans to launch a new crossover all-electric model that can travel over 500 kilometers on a single charge and that takes only 20 minutes to fully charge.

The company will focus on the domestic market and advanced markets such as the U.S. and Europe, while selectively launching EV models in emerging markets due to a lack of charging infrastructure and subsidies.

The maker of the K5 sedan and the Sorento sport utility vehicle aims to sell 500,000 EVs and 1 million environmentally friendly vehicles in global markets outside China in 2026.

Kia also wants to achieve an operating profit margin of 5 percent in 2022 and increase it to 6 percent in 2025 by advancing to new businesses including purpose-built vehicle (PBVs) services and mobility services based on EVs and autonomous vehicles.

In the January-September period, its operating profit margin stood at 3.4 percent. Its fourth-quarter earnings results will be released next week. 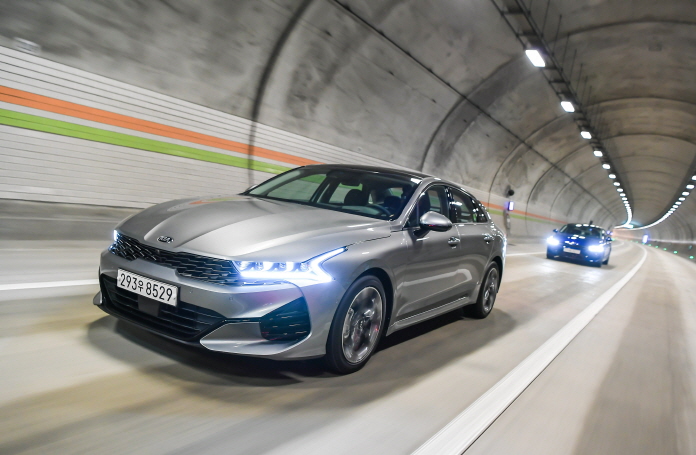 PBVs allow passengers to enjoy tailored services while traveling to their destinations. Upon personalization, they can function as a restaurant, coffee shop and hotel, or even a clinic and pharmacy, in addition to an urban shuttle.

“We are aiming to secure corporate clients that will use PBVs as coffee shops, hospitals and other purposes in business diversification,” a company spokesman said.

When it comes to autonomous vehicle technologies, Kia will work with Ireland-based autonomous vehicle startup Aptiv to develop a self-driving platform by 2022, with an aim to supply it to global carmakers and mobility services firms in late 2024, the statement said.

This year, Kia has set a sales target of 2.96 million vehicles. Its sales fell 1.5 percent to 2.77 million units last year from 2.81 million a year earlier.

In the next two to three years, the company will raise the ratio of SUVs in its lineup to 60 percent by 2022 from the current 50 percent to improve product mix and profitability.

Hyundai plans to inject 41 trillion won in the existing car manufacturing business and 20 trillion won in new technology in a bid to transform itself into a “smart mobility solutions provider.”

The maker of the Sonata sedan and the Palisade SUV aims to rank third in the global electric and hydrogen fuel-cell electric markets in 2025. It targets sales of 560,000 electric and 110,000 hydrogen cars that year.