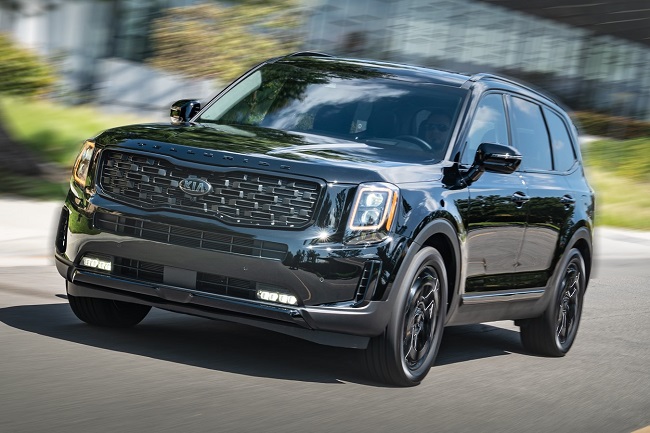 This file photo provided by Kia Corp. shows the Telluride SUV produced in the U.S. for local sale.

Net profit for the three months ended in September fell to 458.89 billion won (US$319 million) from 1.13 trillion won during the same period of last year, the company said in a statement.

It is the second time for the maker of the K5 sedan and the Telluride SUV to reflect massive recall costs in its quarterly bottom line.

In 2019, Hyundai Motor Group reached a settlement with car owners over problems with the Theta II GDi engine, such as engine stalling and non-collision fires, in the United States.

Kia reflected 1.3 trillion won in recall costs in the quarterly results of 2020, and its bigger affiliate Hyundai Motor Co. set aside 2.1 trillion won for the same purpose.

In this past quarter, Hyundai reflected 1.36 trillion won in recall costs.

The won’s weakness against the dollar and an improved product mix helped offset some of the impact caused by supply disruptions amid the extended chip shortage and Russia-Ukraine war, the company said in a statement.

The dollar rose to an average of 1,338 won in the third quarter from 1,157 won a year earlier, according to the Bank of Korea.

As for the fourth quarter, the company expected supply issues will remain major woes weighing on the bottom line.

It will focus on increasing sales of the all-electric EV6 crossover utility vehicle, and the Telluride and Sportage SUVs in major markets such as the United States.

Kia sold a total of 2.17 million vehicles from January to September, up from 2.13 million units a year earlier. It aims to sell 3.15 million autos this year, 13 percent higher than last year.