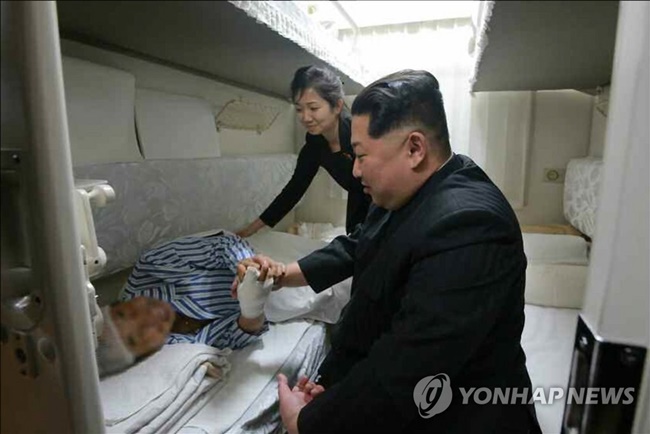 In a letter of condolence to Chinese President Xi Jinping, Kim said he was ‘sorry’ about the bus crash in his country that killed 32 Chinese tourists and injured two. (Image: Rodong Sinmun)

SEOUL, Apr. 27 (Korea Bizwire) — In a rare move, North Korean leader Kim Jong-un has issued an apology for a traffic accident which resulted in the deaths of dozens of Chinese tourists.

In a letter of condolence to Chinese President Xi Jinping, Kim said he was ‘sorry’ about the bus crash in his country that killed 32 Chinese tourists and injured two.

“It is extremely sad that the close Chinese friends, who had come here with feelings of friendship for our people, met with an unexpected accident on our land,” the message read, which was announced by the state-owned KCNA news agency.

“We make a deep apology to the Chinese comrades for the pain which cannot be alleviated with any word, consolation and compensation,” Kim added.

Pyongyang’s expression of regret paints a stark difference with previous leadership, which typically fell short of offering apologies and admitting to faults.

Some experts argue it was Kim’s order to issue public apologies when accidents and improper conduct come to light.

Earlier this month, Kim Yong-chol, the head of national intelligence for North Korea, offered an apology after South Korean reporters were denied entry to cover the first day of the South Korea art troupe’s Pyongyang concert.

Such a move by a North Korean official is seen impossible without approval from Kim Jong-un, and was thought to be almost ‘unthinkable’ during the Kim Il-sung and Kim Jong-il eras.

In 2014, a North Korean government official was made to apologize to residents in public after an apartment building he oversaw collapsed and led to casualties. The story was covered by Rodong Sinmun, the newspaper of the Workers’ Party of Korea.

One North Korean defector who served as a high-ranking governed official says there has been a shift of attitude since Kim Jong-un took office.