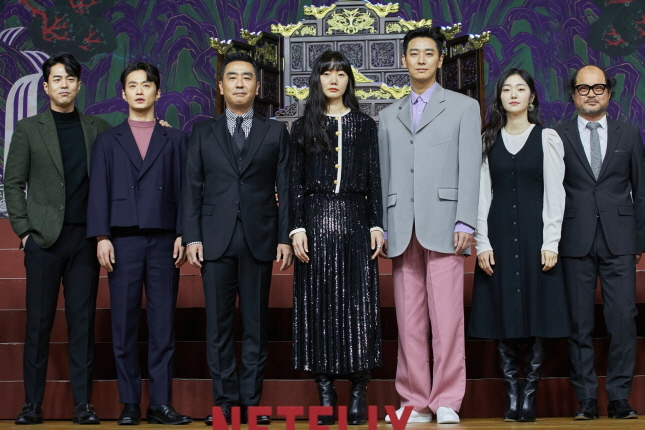 Actors and actress including Ju Ji-hoon (3rd from R) pose at an online press conference on March 5, 2020. (image: Netflix)

SEOUL, March 5 (Korea Bizwire) — Actors in the second season of the smash-hit Netflix zombie thriller “Kingdom” said Thursday that the upcoming series will be a real cliffhanger as it has some fresh ideas and plots.

The sequel to the first Korean original series by Netflix is a story of a crown prince of the Joseon Dynasty, Lee Chang, who has to fight against a mysterious plague and flesh-eating zombies that threaten the country on a large scale.

Based on the huge success of the first season, which was released in January last year, the U.S. online streaming service provider Netflix earlier prepared for the new six-episode original project, with the main cast of Ju Ji-hoon, Bae Doo-na and Ryu Seung-ryong reprising their roles.

Star actress Jun Ji-hyun will also take a role in the new season.

Ju, who acts in the role of the crown prince, said that fans will fall in love with the upcoming show again thanks to unexpected storylines and characters in a historical setting with more spectacular episodes. 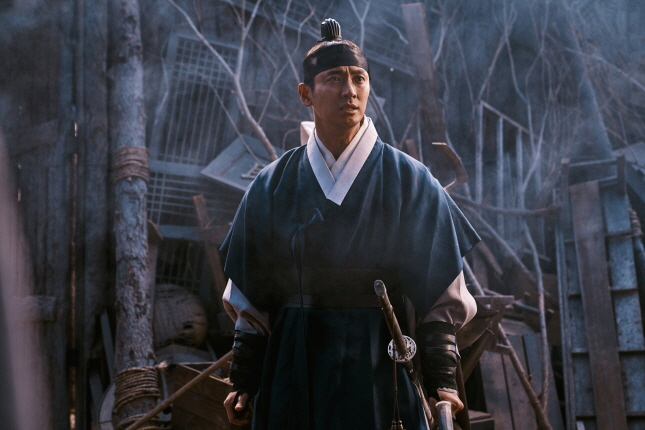 A scene from the second season of “Kingdom.” (image: Netflix)

In the previous season, the crown prince is accused of treason in a political power game after the king is taken with a deadly disease, and he becomes the only hope to save the zombie-hit kingdom in the following season.

Actress Bae Doo-na, playing a female physician who cooperates with the crown prince to fight against the pandemic, said she was surprised by the screenplay filled with bizarre reversals.

“When I first read the script, I gasped in astonishment at every episode,” she said. “My character has grown to give resolution to the epidemic.”

Kim Eun-hee, the screenwriter of the series, said that blood is the main theme of the second season, while she focused on hunger that led people to turn into zombies last time.

“I wants to talk more about blood, or bloodline. Patients crave blood, while humans long for a bloodline or lineage,” she said. “The drama will portray the two different worlds of people who desire blood.”

The author, who has created many hit TV series including the thriller “Signal” (2016), also hinted at the possibility of a third season.

“If this latest series gains popularity, we will probably be given a chance to produce the next season,” she said. “I wish that I can participate in the project until the 10th season.”

The second season of “Kingdom” is set to premiere globally on the U.S. video streaming service on March 13.