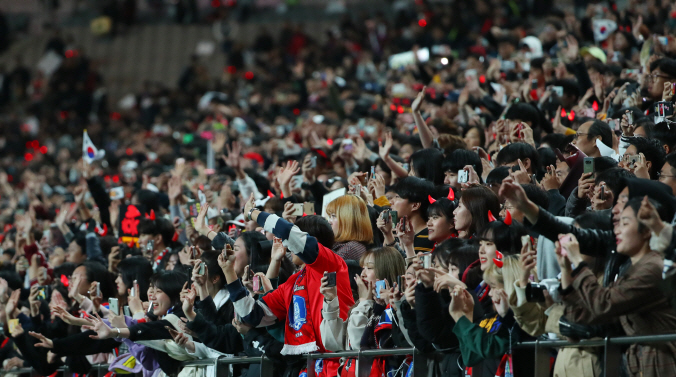 SEOUL, Oct. 17 (Korea Bizwire) — Park Ji-hyun and her friends knew they were among the lucky ones when they bought tickets for South Korea’s friendly football match against Uruguay.

“We had to wait until refunded tickets were on sale,” said Park, who visited Seoul World Cup Stadium in Seoul on Friday with her two friends to watch the friendly match. “For the last seven days, we checked the online ticketing website to see if there are any refunded tickets. We were lucky.”

These days, getting tickets for national football team matches has become a war for local football fans following the rising popularity of the Taeguk Warriors now led by head coach Paulo Bento.

Football fans now call the national football team “BTS,” and they are not referring the team to the boy band “Bangtan Boys.” For them, “BTS” means “Bento’s Boys,” and the national players are actually enjoying boy band-like popularity.

“People say I’m cute, but I don’t know if I’m cute enough,” South Korean attacking midfielder Lee Seung-woo said. “This big support from fans makes us play a better game and be more responsible. We really want to give back fans’ support by playing a good game.”

According to the Korea Football Association (KFA), tickets for South Korea’s friendlies against Uruguay and Panama this month were sold out just three hours after sales began on Oct. 1. It was the first time in 15 years that tickets for the men’s national football matches sold out on the first days of sales.

And even though it was on a weekday and was held outside the Seoul metropolitan area, the KFA said all 25,486 tickets for South Korea’s friendly against Panama were sold. The match was staged at Cheonan Stadium in Cheonan, South Chungcheong Province, on Tuesday. 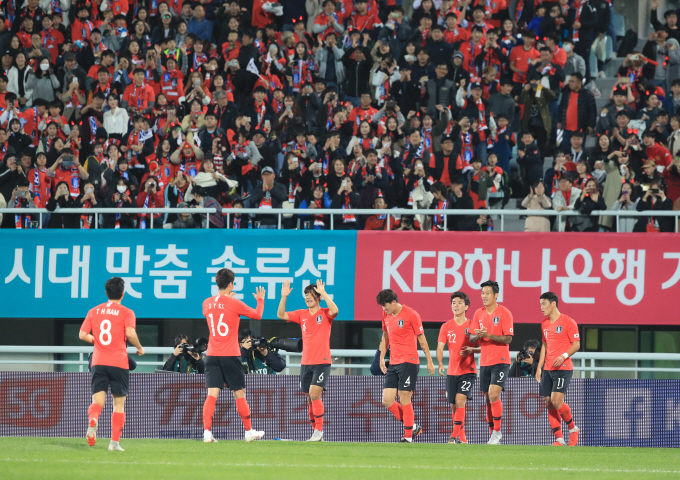 The KFA said the recent boom in ticket sales can be explained throught the rise of teenage girl fans.

“The ratio of male to female in ticket sales was 7:3 in previous matches, but for September friendlies, it was 4.5:5.5, meaning there were more women than men,” said Yi Cheong-seop, head of the KFA’s marketing team. “We’re also seeing more teenage fans than before.”

“We saw players like Son and Lee becoming core members to the national team through the 2018 FIFA World Cup, and they achieved good results at the Asian Games,” he said. “We think that these fans are having more interest in young star players than the team. But it’s positive that they’re also interested in not only star players, but also rising players and newcomers to the national team.” 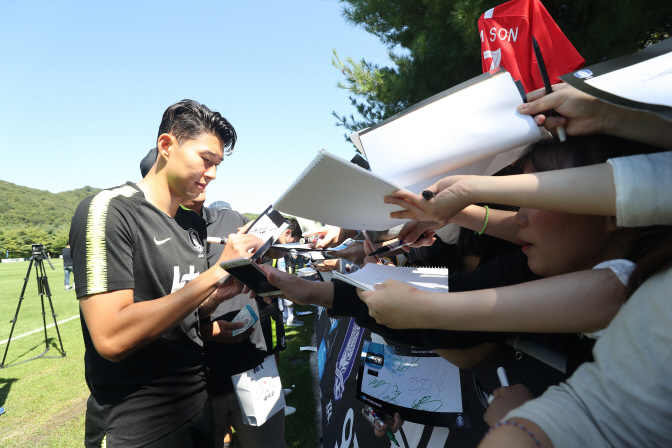 With the popularity of young football stars rising, the KFA started selling premium tickets that allow fans to engage more closely with national team players, according to Yi.

The KFA introduced a “Premium S” ticket last month, which gives fans a national team player’s autographed jersey and a dinner buffet at the stadium. It also allows access to the national team buses and locker, as well as a photo session with national team members.

“We realized that fans are really curious about the star players, so we tried to offer services that are more distinctive and special,” he said. “It looks like this premium package will likely be continued.”

Yi said it’s a pity that South Korea can’t keep up the hot ticket sales next month, since South Korea will travel to Australia in November to play friendly matches. But what’s positive is that it can have a positive influence on the KFA’s future sponsorship deals.

“We usually sign sponsorships in four years, and fortunately, we’ll have renewal negotiations on some deals next year,” he said. “Obviously, our recent ticket sales will help us in securing sponsors.”

Yi said the homework for the KFA is to maintain the national team fan base in the future. He added the KFA is trying to help fans, especially young female fans, get used to cheering culture at the stadium. 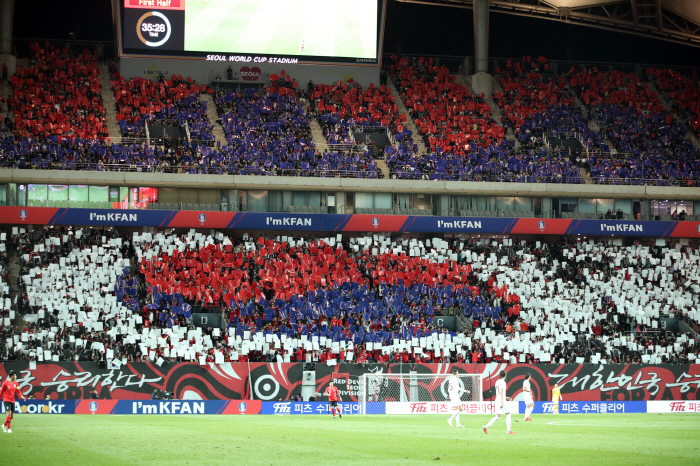 For the match against Uruguay, the KFA organized a card stunt in which all the fans in the stands displayed the message “Dream★ will continue,” in Korean. The KFA said this was the first time that a card stunt event was done by all the fans at the stadium.

“They need to experience what it feels like to watch a football match in the stands and have a taste of football culture,” he said. “We’re currently preparing a tool that can improve communication with fans by collecting data from our ticket sales. We want to implement the concept of customer relationship management in football by launching a KFA membership next year.”

With the inflow of a new group of football fans, the K League, South Korea’s professional football league, hopes it can hop on board the popularity of the national team. For the friendly against Uruguay, the K League opened a pop-up store selling its merchandise.

However, pundits said it will require much more efforts to bring national team football fans into the K League.

“I think the fan base of the national team and the K League is just different,” said Hahn June-hea, a football commentator at local broadcaster KBS. “Besides if you look at the players who are especially popular, such as Son Heung-min and Lee Seung-woo, they play overseas.”