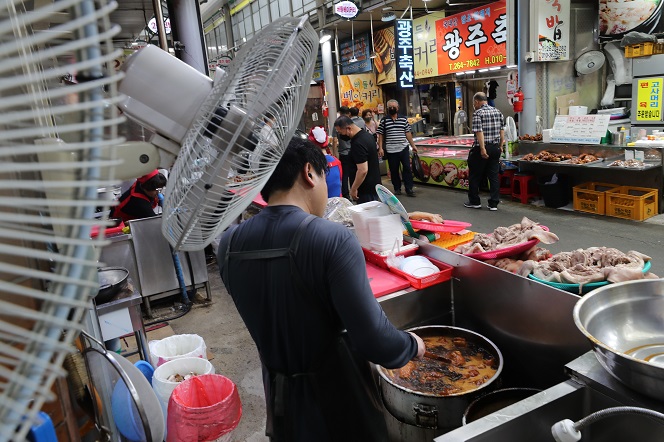 A cook prepares food for customers at a traditional market in the southwestern city of Gwangju on Aug. 1, 2022. (Yonhap)

SEOUL, Aug. 8 (Korea Bizwire) — Restaurant kitchen staff are suffering from the scorching heat wave that has been ongoing for days.

While heat-related illnesses normally occur outdoors, it isn’t rare for them to take place indoors such as in the kitchen, where ventilation or air conditioning are often unavailable.

“There’s a duct in the kitchen, so whatever air conditioning we have will simply be sucked out of the room,” said Kim Kyeong-seok, a 35-year-old restaurant owner in Incheon.

Kitchen workers have to withstand not only heat but also humidity.

“When it comes to cooking noodles, there’s a lot of steam that comes off during the process. When it gets particularly humid, the rooms are twice as hot,” said Park Myeong-jun, a 36-year-old chef in Gyeonggi Province.

Many cafeterias use large braziers to prepare food for hundreds of people, adding to the scorching heat.

The Korea Disease Control and Prevention Agency reported that 20.4 percent of all reports on heat-related illnesses from May 20 of last year to August 7 of this year occurred indoors while the individuals affected were using cooking equipment or fell victim to a lack of air conditioning.