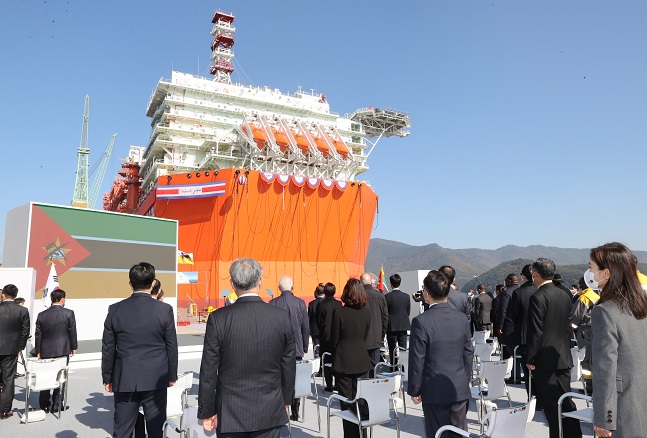 A christening ceremony for the Coral-Sul floating facility is under way at the shipyard of Samsung Heavy Industries Co. in the port city of Geoje off South Korea’s southern coast on Nov. 15, 2021. The offshore floating facility, 432 meters long, 66 meters wide and 39 meters high, is capable of producing liquefied natural gas (LNG) off the coast of Mozambique. (Yonhap)

The project uses a floating liquefied natural gas (FLNG) facility to extract gas from the seabed under the goal of producing and selling 3.37 million tons of LNG per year for the next 25 years.

The facility, completed by Samsung Heavy Industries Co. at its Geoje shipyard last year, arrived at the gas field in January and succeeded in the first shipment after going through trial operations.

KOGAS is now participating in the entire value chain ranging from the stage of gas exploration to the development of gas fields, the construction of an FLNG facility, and the production of LNG.

The Coral South Project develop gas wells in seas 250 kilometers northeast off the coast of Mozambique.

KOGAS participated in the Area 4 of the Coral South project with a 10 percent stake and secured enough natural gas to cover domestic demand for three years.