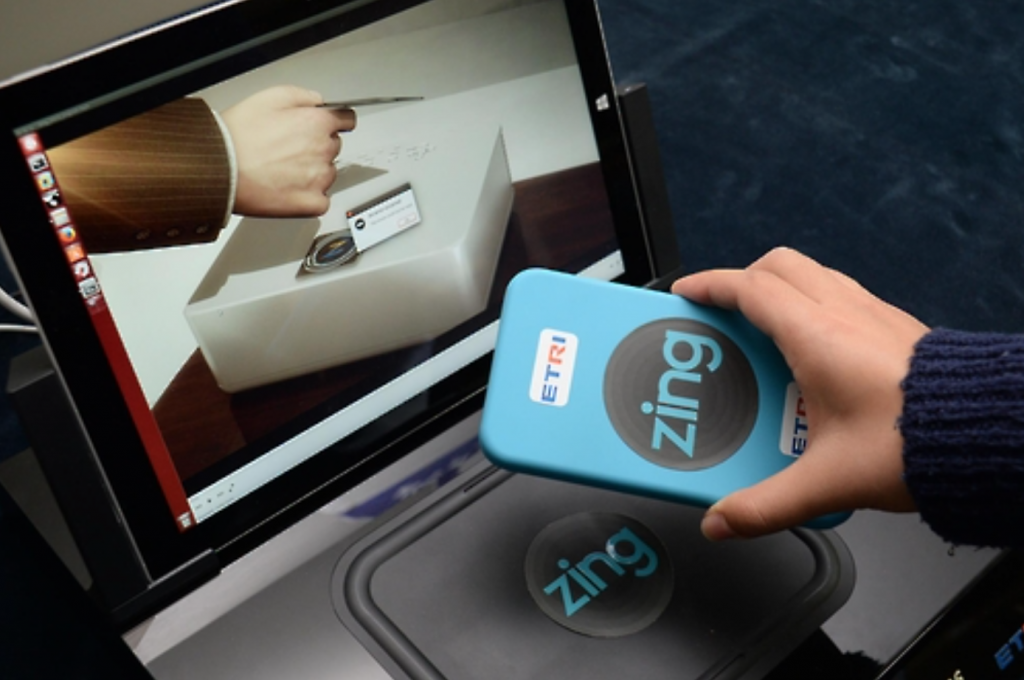 Potential applications include not only smartphones and laptops, but also smart home appliances like TVs and refrigerators, in addition to smart IoT digital signage and other kiosks. (image: ETRI)

DAEJEON, Oct. 18 (Korea Bizwire) – The Electronics and Telecommunications Research Institute (ETRI) announced Tuesday that it has developed a super-speed data transfer technology called Zing, that will allow high-bandwidth transmission of data within a distance of 10 centimeters, without the need of Internet connectivity.

According to ETRI, Zing is an IoT communications technology that can transmit and receive data when a device, such as a smartphone, is tapped near a kiosk (or other compatible devices). It is roughly 8,000 times faster (3.5Gbps) than conventional NFC – meaning it would take just three seconds to transfer a 1-gigabyte file.

Potential applications include not only smartphones and laptops, but also smart home appliances like TVs and refrigerators, in addition to smart IoT digital signage and other kiosks.

The research team has already developed Zing hardware, including modem and RF modules, on top of its software platforms, and is currently researching embedding the technology in various smart devices.

Furthermore, ETRI plans to develop a Zing-based medical device in partnership with Good Doctors Co., Ltd., a Korean medical equipment manufacturer. The technology will be used to swiftly transfer x-ray images at dental clinics to a nearby doctor’s computer, an ETRI official said.

“The technology is not only applicable in IoT, but in smart homes, mobile devices, wireless medical imagery equipment, and even virtual reality,” said an official.