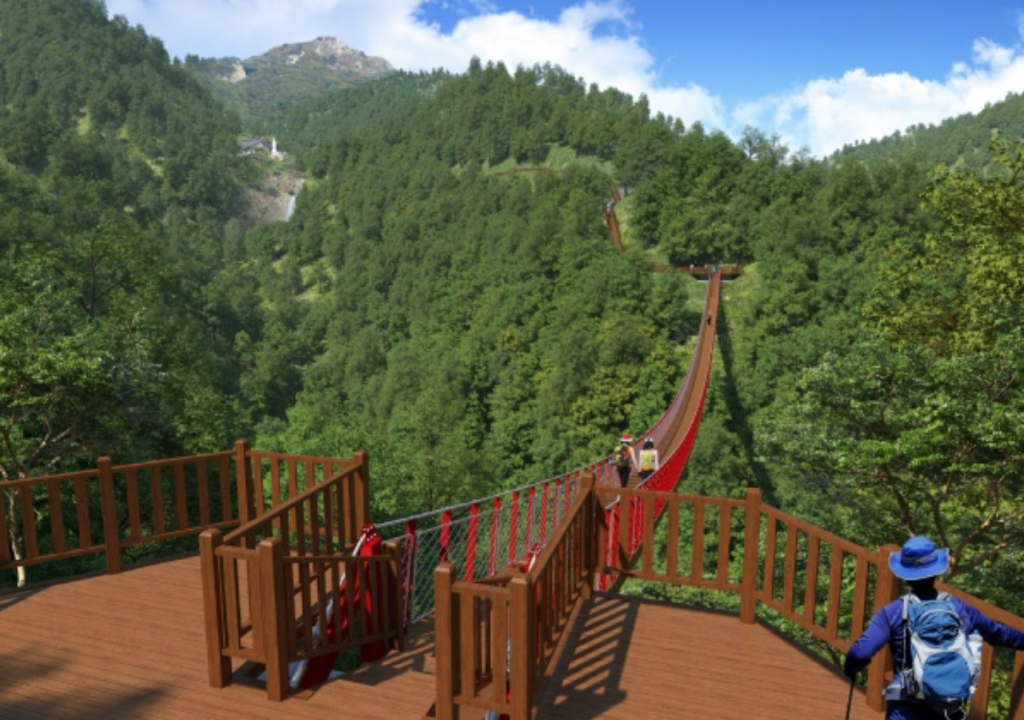 The structure is 150 meters long and 1.5 meters wide, and hangs some 170 meters in midair, connecting the far sides of a deep valley. (image: Paju)

The city of Paju, in Gyeonggi Province, has finally completed the five-month construction of a hanging bridge dubbed “Wungye Hanging Bridge” on Gamaksan (mountain). The bridge is now the longest of its kind in South Korea.

“Wungye Hanging Bridge is part of the Gamaksan Healing Theme Park project, which was developed jointly with Yangju and Yeoncheon County,” said a Paju official. “The completion ceremony will take place on September 1.”

The 2.8-billion-won ($2.5 million) bridge was built near the mountain’s Wungye Falls. The structure is 150 meters long and 1.5 meters wide, and hangs some 170 meters in midair, connecting the far sides of a deep valley. Four 40mm cables support the bridge, which, according to officials, can hold up to 900 adults (70kg per person) at a time with the capacity to withstand 30m/s winds.

With a more international approach, the city gave the bridge another name, the “Gloucester Heroes Bridge”, commemorating the battles fought by allied troops from Gloucester, U.K., during the Korean War. Representatives from the city paid a visit to the site of the new bridge in April of this year.

The bridge’s commercial opening is scheduled for October 22.

The upcoming theme park, which is also expected to be completed in October, will include a 10,000-square-meter residential complex, waterside square, culture park, nature experience center, and a 21-kilometer-long mountain trail.

2 thoughts on “Korea Introduces its Longest Hanging Bridge Yet”