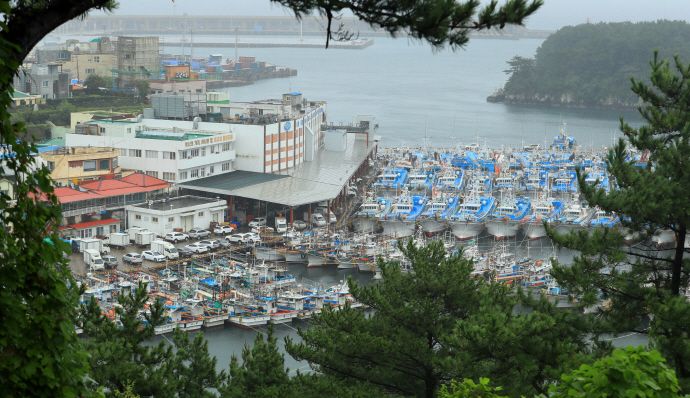 Hundreds of fishing vessels are docked at the port of Seogwipo on Jeju Island on Oct. 5, 2018, as Typhoon Kong-rey approaches the South Korean resort island. (image: Yonhap)

The Korea Meteorological Administration (KMA) said that this year’s 25th typhoon, which has slightly weakened from “very strong middle-class” to “medium-strength middle-class,” is expected to pass over Jeju Island’s port of Seongsan at around 6 a.m. on Saturday before moving into the East Sea in the afternoon via the areas near Busan.

The possibility of the powerful typhoon directly battering the largest port city in South Korea cannot be ruled out, the KMA said.

Earlier this week, the KMA forecast that the typhoon would pass near Jeju between 8 and 9 a.m. and Busan between 3 and 6 p.m.

As of 9 a.m. Friday, Kong-rey was traveling north-northwest at a speed of 25 kilometers per hour (kph) about 270 kilometers northwest of Japan’s Okinawa Island, the agency said.

It has an atmospheric pressure of 975 hectopascals at its center, and the maximum wind speed near the center is 32 meters per second, or 115 km per hour, with a strong wind radius of 420 km, the agency noted.

The Ministry of Land, Infrastructure, and Transport said a total of 131 domestic and international flights were canceled Friday due to the typhoon.

Most of the canceled domestic flights were to depart from Jeju International Airport, while flights to Okinawa were among the eight canceled international flights.

Ministry officials said that more flights are likely to be canceled as the Korean Peninsula comes under the influence of the typhoon.

The KMA said the typhoon is expected to dump up to 500 mm of heavy rain in Jeju and the southern and southeastern provinces.

Prime Minister Lee Nak-yon presided over a meeting of government officials in the morning to discuss measures to minimize typhoon-related damage, while the Central Disaster Management Headquarters has begun operations to map out the government’s anti-typhoon countermeasures.

Kim asked citizens to monitor the path of the typhoon through television and radio broadcasts and minimize outdoor activities.