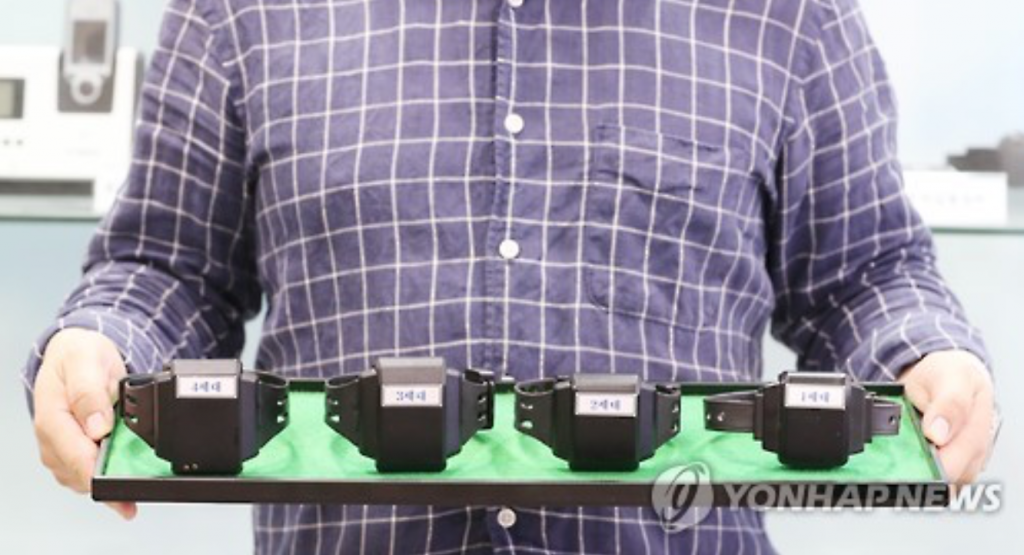 The ankle monitors have continuously evolved since their introduction, improving on weaknesses, and authorities are now making use of fourth-generation models (far left). (image: Yonhap)

Since its implementation, the scope of the EMS program quickly expanded to cover not only sex offenders but also child kidnappers, murderers, and perpetrators of other violent crimes. The number of individuals wearing the anklets also increased rapidly, from 151 in 2008 to 2,501 in 2016 (as of May).

The ankle monitors have continuously evolved since their introduction, improving on weaknesses, and authorities are now making use of fourth-generation models. But according to officials, these monitors will soon become intelligent with an ability to determine even signs of criminal activities yet to be committed.

The Ministry of Justice announced early Tuesday that a new Intelligent EMS (I-EMS) is set for a pilot operation in 2018. The new system will allow preemptive actions by analyzing data in the criminal’s surroundings as well as his or her past behaviors, contrary to the current system, which focuses on a law enforcement response after irregular activities have been detected.

The I-EMS will be divided into two parts: an integrated ankle monitor, and a crime prediction system.

Currently, ankle monitors come with two components – an anklet, and a GPS device that the user must carry. This poses various problems such as the loss of GPS devices, which send a signal to the authorities when they are more than five meters away from the wearer’s anklet.

However, the new integrated ankle monitor will come in a single unit, and the wearer’s movements and location information will be monitored by the authorities in real-time. The Central Control Center will then use the information, in addition to data on the wearer’s past activities and criminal techniques, to predict the likelihood of reoffending.

Meanwhile, the ministry will also improve the durability of the anklets, which can still be easily cut free. The problem resurfaced recently when the suspect in a deadly shooting on October 19 was found to have removed his anklet before committing the deadly act.

“Our research on the new anklets focuses on improving durability as well, with researchers experimenting with different materials,” the official added. “By 2018, we’ll be able to present a system that overcomes our current setbacks.”