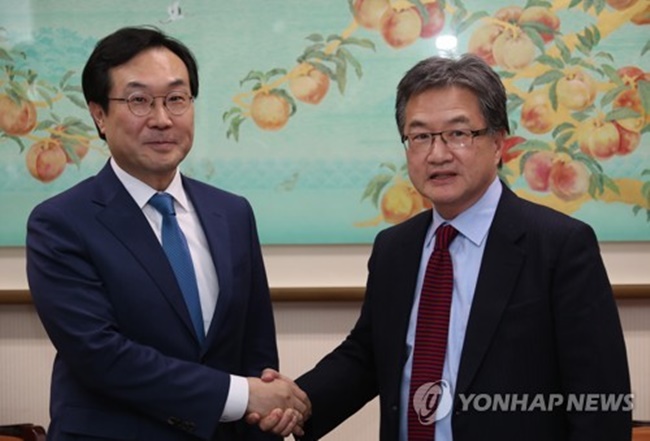 Lee Do-hoon, special representative for Korean Peninsula peace and security affairs, and his U.S. counterpart, Joseph Yun, agreed to maintain close cooperation to make the Feb. 9-25 PyeongChang Olympics a peaceful and successful event, according to the ministry.

The meeting comes amid cautious hopes that the easing of tensions following the North’s decision to participate in the Winter Olympics could pave the way for talks between Washington and Pyongyang on the latter’s nuclear ambitions.

Early in the day, the North confirmed that Kim Yong-nam, president of the Presidium of the Supreme People’s Assembly, will head a high-level delegation to participate in the opening ceremony of the PyeongChang Olympics. The ceremony will also be attended by U.S. Vice President Mike Pence.

At the start of the meeting disclosed to reporters, Lee said, “(I look) forward to having in-depth discussion to move (forward) here beyond PyeongChang.”

Yun agreed, saying, “We have a lot to discuss.

“I think everyone was happy at the level of cooperation and collaboration between the U.S. and South Korea leading up to the games,” he added, referring to his meetings with Korean officials and experts in Seoul since arriving Friday. “So I expressed our thanks for the close cooperation and I think so far it’s going good.”

After the meeting that lasted less than an hour, he told reporters seeking comments that the U.S. wants to do everything it can to make the Olympic Games a successful and “very safe” one.

On Friday, Yun told reporters after meeting officials of the unification ministry handling inter-Korean affairs that the U.S. wants to open dialogue with the North for its denuclearization.

“We want to open dialogue with North Korea, we want to have a credible dialogue, a dialogue that could lead … towards denuclearization,” he said. “That is our goal, and of course President Moon has also emphasized that goal too.”

Lee and Yun are also expected to discuss what ramifications the North’s planned military parade commemorating its army’s founding day this week could have on the security situation on the peninsula.

The two men last met in Washington last month. Yun is scheduled to have talks with his Japanese counterpart, Kenji Kanasugi, in Tokyo on Tuesday.