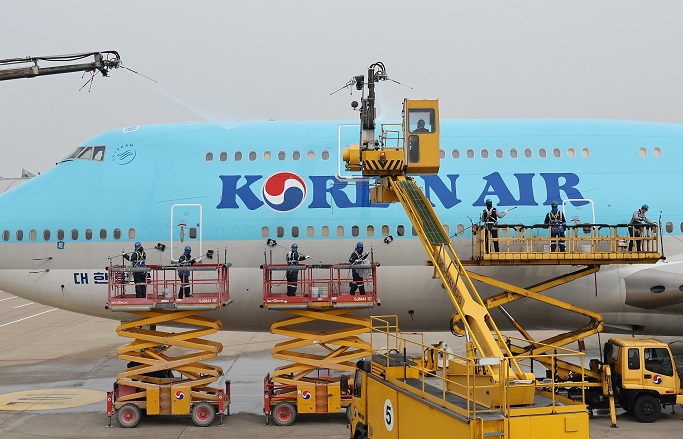 Workers scrub the fuselage of a Korean Air plane with mops at a hangar in Incheon International Airport, west of Seoul, on April 18, 2022, as part of a springtime cleaning detail by South Korea’s top carrier. (Yonhap)

SEOUL, April 21 (Korea Bizwire) — Korean Air Lines Co., South Korea’s national flag carrier, said Thursday it was slapped with a fine of 110 billion won (US$89 million) in Russia due to the omission of its departure process at a Moscow airport a year ago.

Russia’s customs authorities imposed the fine, arguing Korean Air’s KE529 cargo plane headed from Incheon to Frankfurt via Moscow took off without receiving an official seal before departure from the customs office of Sheremetyevo International Airport, according to Korean Air.

But Korean Air balked at the notice delivered on Feb. 24 this year, as it received the seal right after the departure and submitted all necessary documents at the Russian airport on Feb. 22 last year.

The company said it has raised an objection against the fine with Russia’s federal customs office.

“We will take all possible steps to cancel or reduce the excessive and unreasonable fine,” she said.

Industry people see Russia’s imposition of the fine as having to do with its financial problems amid the United States’ economic sanctions against Russia following its Feb. 24 invasion of Ukraine.