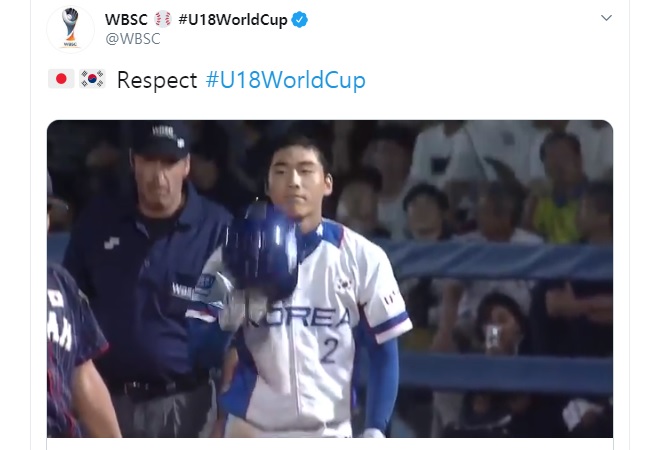 The video reached 160,000 views as of Sunday, moving the hearts of netizens around the world. (image: WBSC)

SEOUL, Sept. 9 (Korea Bizwire) — A youth baseball match between South Korea and Japan is moving the hearts of citizens in both countries, despite the deteriorating political relationship between the two states.

On Friday, South Korea and Japan met at Gijang-Hyundai Dream Ballpark in Gijang County, Busan, to compete in the final round of the 29th WBSC (World Baseball Softball Confederation) U-18 Baseball World Cup.

A situation broke out in the bottom of the 9th inning when Japanese pitcher Hiroya Miyagi threw a 88 mph fastball at South Korean outfielder Lee Ju-hyoung’s helmet.

Following the incident, Miyagi took off his helmet and bowed to Lee, who was awarded first base, as an apology.

Lee also took off his helmet and cordially responded to the Japanese pitcher. It was a demonstration of excellent sportsmanship in a situation that might have turned out worse.

WBSC, organizer of the baseball championship, posted the video on its official Twitter account, with a comment that said ‘Respect’ with the flags of the two countries.

The video reached 160,000 views as of Sunday, moving the hearts of netizens around the world.

“The video shows how South Korea and Japan can move forward,” said one netizen. “It was a truly remarkable moment.”

Prior to the event, Japan had been concerned about sending the baseball team to South Korea.

However, after finding out that South Korea’s anger was aimed towards the Japanese government, not the Japanese people, the team decided to bring back their uniforms with the Japanese flag just two days after entering South Korea.

The sportsmanship of the two baseball teams has left a long-lasting impression for the people in the two countries.