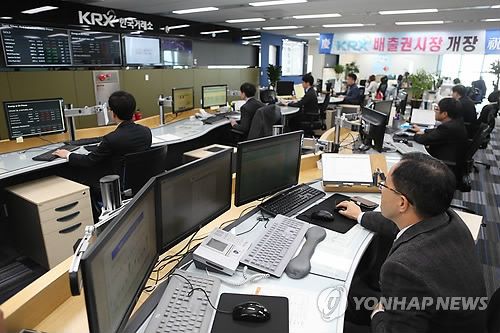 The Korea Exchange (KRX) began the national cap-and-trade system to join the government’s efforts to curb greenhouse gas emissions to 30 percent below business-as-usual (BAU) levels over the next five years. (image: Yonhap)

SEOUL, Jan. 12 (Korea Bizwire) — South Korea’s carbon emission market was quiet on the first day of trading on Monday, with the initial price for allowances rising to a level similar to that of the European carbon exchange.

The Korea Exchange (KRX) began the national cap-and-trade system to join the government’s efforts to curb greenhouse gas emissions to 30 percent below business-as-usual (BAU) levels over the next five years.

A total of 525 local companies are subject to trade an emission quota of 15.98 billion Korean Allowance Units (KAUs), with one KAU equivalent to a ton of carbon dioxide gas.

The market is only open to companies subject to the emission quota as well as three state-controlled lenders. During the starting stage from 2015 to 2017, companies under the emission target will receive carbon allowances for free.

The KRX said it will operate the derivative market for shortened hours before extending them to full operation.

“I expect that the carbon trading scheme will help (companies) effectively reduce carbon emissions and help the green industry grow,” KRX Chairman Choi Kyung-soo said in an opening ceremony held at the Busan headquarters. “(The KRX) will make efforts to develop the carbon market in the mid- and long-term, not focusing on the short-term market performance.”

Market watchers expect thin trading for this year due to a lack of confidence in the new system and the flexible accounting system, saying that trading will pick up starting in 2018, when the second stage of the program begins after a three-year grace period.

“As companies can carry forward or use allowances in advance, market participants are likely to wait and see in the early stage of trading,” said Kim Sang-ku, a researcher at Kiwoom Securities.

In the long term, however, the scheme will help expand the green energy market as South Korea, the world’s seventh-largest carbon emitter, is facing growing pressure to join global efforts to tackle climate change, they said.

“As carbon reduction capacity may emerge as one of the key competitiveness factors of individual companies, the eco-friendly and renewable energy market will grow in the long term,” said Park Jong-seon, an analyst at Eugene Investment & Securities Co.