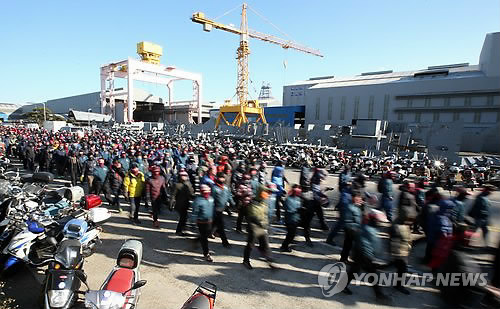 Guidelines setting the scope of base wages have become the central issue in management-union negotiations after the Supreme Court ruled in late 2013 that bonuses should be counted as ordinary wages. (image: Yonhap)

ULSAN, Feb. 12 (Korea Bizwire) — A local court on Thursday ruled in favor of the Hyundai Heavy Industries‘ union, ordering the company to count regular bonuses as base pay.

Ten unionized workers at the world’s largest shipbuilder had filed a lawsuit against the company early last year, claiming regularly paid bonuses should be included as ordinary wages. Such a broader definition of the ordinary wage raises the baseline in calculating various stipends, including overtime, holiday shift pay, paid leave and retirement pensions.

Hyundai’s workers receive 800 percent of their base salary as bonuses. The ruling also covers workers at Hyundai Mipo Dockyard, a unit of Hyundai Heavy.

Guidelines setting the scope of base wages have become the central issue in management-union negotiations after the Supreme Court ruled in late 2013 that bonuses should be counted as ordinary wages. Thursday’s ruling was closely watched as a benchmark decision that may affect the entire industry because of Hyundai Heavy’s leading position in the sector.

In a contrasting case last month, a court in Seoul had ruled in favor of Hyundai Motor in a similar wage dispute, saying bonuses do not have to be included in base wages for more than 90 percent of its workers.

Hyundai Heavy’s labor and management on Wednesday reached their second tentative agreement on a pay raise and an overhaul of the wage system for junior-level workers.

The 16,000-member union will put the tentative agreement to a vote Monday.

The two sides came to an agreement in early January on wage increase, but it was rejected by the workers at the time.