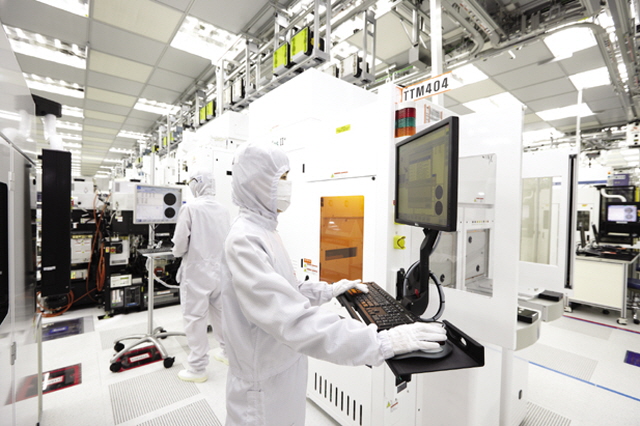 This undated photo provided by SK hynix Inc. shows workers at the company’s chip plant in Icheon, south of Seoul.

SEOUL, Aug. 13 (Korea Bizwire) — South Korea’s electronics industry shrank in 2019 for the first time in 10 years as domestic and overseas demand weakened on a U.S.-China trade war and other negatives, a report showed Thursday.

The industry’s output came to 321.9 trillion won (US$272 billion) last year, down 12.5 percent from the previous year’s record high of 367.9 trillion won, according to the report from the Korea Electronics Association (KEA).

Its production had been growing at an average annualized rate of 2.5 percent over the past 10 years before reaching a zenith in 2019.

Output of semiconductors and display panels, which accounted for nearly 85 percent of the total, sank 17.5 percent on-year to 196.3 trillion won.

Production of communication and broadcasting equipment also fell 4.5 percent, and that of home appliances dipped 3.7 percent.

The electronics industry saw its domestic demand inch down 0.5 percent on-year to 242 trillion won in 2019, compared with an average on-year increase of 3.2 percent over the past 10 years.

Exports also fell 3.9 percent on-year to $176.9 billion last year, compared with an average growth rate of 3.9 percent over the past decade.

The ratio of the industry’s exports to output edged up to 64.1 percent in 2019 from 61.3 percent the previous year.

The KEA said the industry’s 2019 setback resulted from the trade row between the world’s top two economies, a trade dispute between Seoul and Tokyo, sluggish global IT demand and other unfavorable factors.

Meanwhile, imports by the local electronics industry stood at $108.4 billion last year, up 1.2 percent from a year earlier. Imports posted an average on-year increase of 5.7 percent over the past decade.