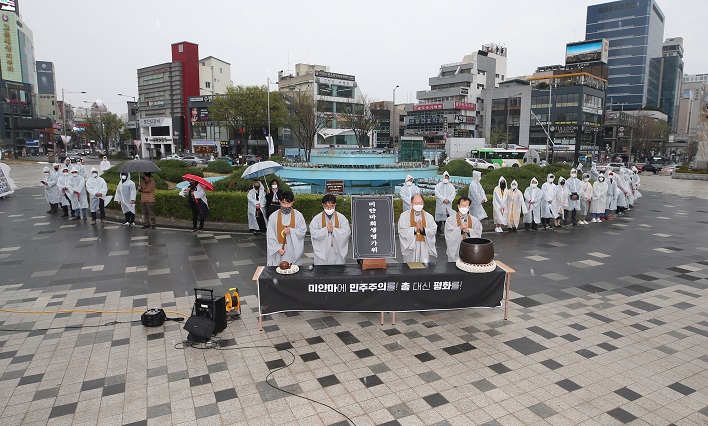 South Koreans hold a memorial service in the southern city of Gwangju on March 27, 2021, for Myanmar people killed in protests against a military coup. (Yonhap)

SEOUL, April 6 (Korea Bizwire) — The South Korean government advised all Korean expats in Myanmar to return last week as the country spirals down into a bloody dispute between the military and protestors.

South Korean conglomerates as well as small and medium enterprises in Yangon have reportedly started to leave the country.

Local Korean residents, however, are less enthusiastic about leaving.

“The United States, Japan, Singapore, and many countries from Europe engage mostly in state-to-state or business-to-business (B2B) investments in Myanmar,” said an official at the Korea Garment Association in Myanmar.

“Those deployed to the country can always go back to their country or business when it becomes too dangerous, and come back once the situation improves.”

In comparison, many Korean residents in Myanmar run local businesses that are not funded by the state or conglomerates, but by themselves, making it more difficult for them to leave the country.

“We’ll have to stay even if a bomb falls into our backyard. We have our property to protect,” said a Korean businessman in Yangon.