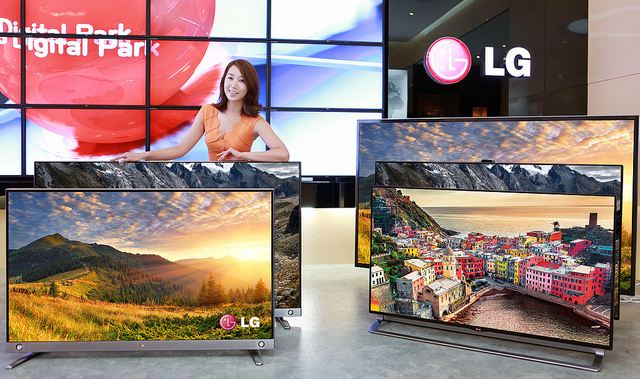 The UHD TV panel market, also known as the 4K market, will likely grow to a size of 40 million units in 2015, accounting for 15 percent of the global panel market. (image: LG Electronics)

The UHD TV panel market, also known as the 4K market, will likely grow to a size of 40 million units in 2015, accounting for 15 percent of the global panel market, according to the report by market tracker IHS Technology.

Its expansion estimated for this year marks a 108 percent growth from 2014, the IHS report showed.

The report said the UHD TV market will be led by Samsung Display and LG Display, the two major display panel makers in Korea, with their combined market share predicted to be some 57 percent.

Taiwanese rivals are expected to trail behind with a 27 percent share, followed by China’s 12 percent thanks to the government support, but the gap with Korean players will still be wide, the IHS noted.

Large-size panels in the UHD TV lineup are forecast to see a more brisk growth than that of smaller panels due to higher demand. The on-year growth rate for panels in the range of 49-55 inches is estimated at 27 percent in 2015, with that of 58-65 inch models predicted to be 26 percent in the same period.

In contrast, panels under 40 inches will only see a 2 percent on-year growth, the report said.

The entire global TV panel market will likely reach 265 million units this year, up 5 percent from the previous year, according to the IHS.