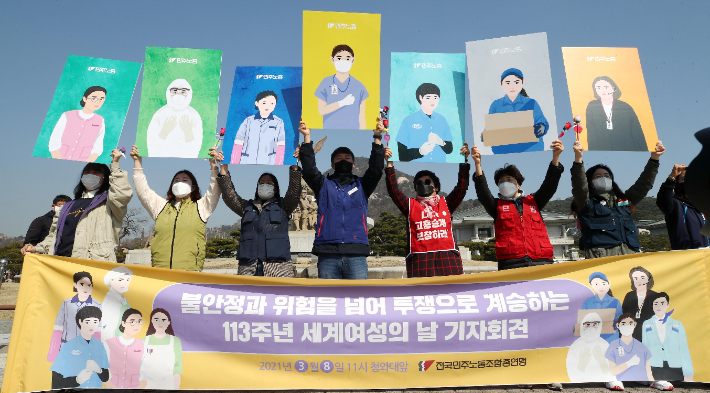 Members from the Korean Confederation of Trade Unions hold up paintings of female laborers during a news conference to mark International Women’s Day near the presidential office in Seoul on March 8, 2021. (Yonhap)

SEOUL, March 17 (Korea Bizwire) — Amid a major public divide over the issue of President-elect Yoon Suk-yeol’s vow to abolish the Ministry of Gender and Equality, two-thirds of South Koreans in their 20s believed that gender equality policies should be prioritized on the government’s agenda, a women’s think tank said Wednesday.

The Korean Women’s Development Institute conducted a survey of 1,504 men and women between the ages of 19 and 29, among which 83.6 percent of women strongly supported the idea of placing gender equality as the primary focus of the government’s agenda.

In contrast, only 50.1 percent of men said likewise.

However, both men and women showed strong support for certain sub-categories of gender equality policy, such as eradicating violence against women and men’s participation to support women’s work and family balance.

On the other hand, a question about the rationality of fixing the organized culture that undermines female entrepreneurs from maintaining their careers was met with conflicting views between male (55 percent) and female (87.4 percent) respondents.

When asked about introducing a mandatory gender ratio policy for electing management staff and companies, 68.7 percent of women gave their support.

Only 26.1 percent of men, however, said likewise.

“While there were differences in views between men and women, largely two-thirds of all respondents in their 20s supported the idea of making gender equality a government priority,” the research team said.

“Sustained development of gender equality policies is still in demand.”