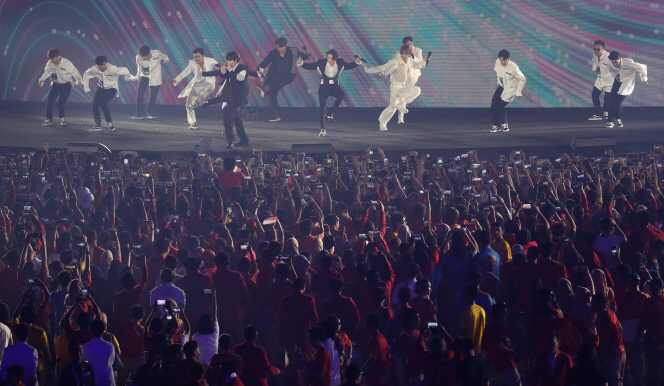 K-pop fans in Indonesia argue that it is just a hobby of their own, and that it has never interfered with their daily lives. (Yonhap)

SEOUL, Mar. 13 (Korea Bizwire) — The winner of “Putri Indonesia 2019,” the most prestigious beauty contest in Indonesia, drew attention to “Korea-made mask packs” as she mentioned them as a secret to her beauty.

According to CNN Indonesia on Monday, the winner, Frederika Alexis Cull, explained how much she loves the mask packs and how often she uses them.

Cull’s comments are cited as one of the examples of Indonesia’s recent Korean wave. Indonesia’s online media are delivering news from the Korean entertainment industry in near real time.

The media released a series of in-depth reports on why Indonesian K-pop fans and young people are enthusiastic about Korean culture, and suggested that the Korean wave will become stronger for the time being.

As the Korean wave becomes stronger, some view as it problematic.

The most talked about problem is that some fans are overspending. Tickets for K-pop concerts held in Indonesia are usually 1.1 million to 2.5 million rupees (US$77-175).

Considering that Jakarta, the wealthiest region in Indonesia, has set a minimum wage of 3.94 million rupees per month, tickets are quite expensive.

Nevertheless, tickets for popular entertainers sell out every time, and related products are also hot sellers.

The conservative older generation is concerned that young people who are obsessed with K-pop are wasting time and money and losing their sense of reality in fantasy.

Some even showed discomfort saying some younger counterparts even deify Korean stars as gods.

K-pop fans in Indonesia argue that it is just a hobby of their own, and that it has never interfered with their daily lives.

According to a local psychology expert, the Korean wave is very sophisticated as it receives full attention and support from the media and other related industries and social media and it is creating a bond between stars and fans.

This is what sets the Korean wave apart from North American stars such as Katy Perry or Justin Bieber. The expert further added that she often sees cases of mental illness related to Korean wave fandom.