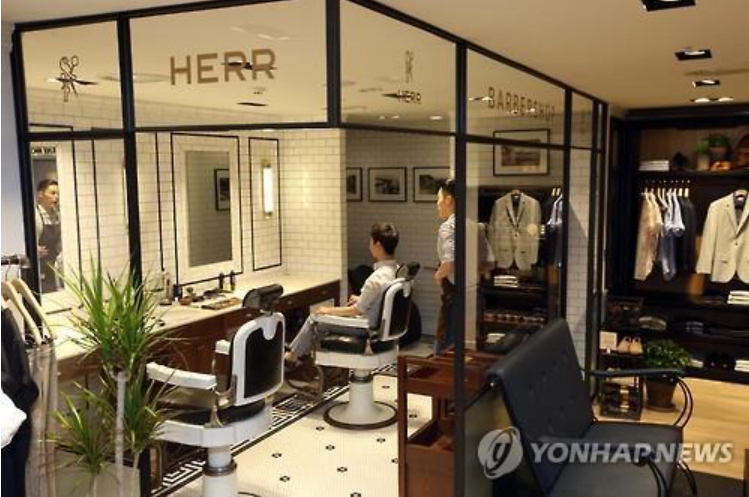 The barbershop ‘HERR’ has been added to the already existing select shop, offering consulting services related to style and haircuts. (Image courtesy of Yonhap)

Lotte Department store has opened a Club Monaco Men’s shop. The barbershop ‘HERR’ has been added to the already existing select shop, offering consulting services related to style and haircuts. The barbershopis also offering customers a traditional English wet shaving. It is the first time for a barbershop to enter an apparel store, which makes the ‘special store’extra special.

Another noticeable popup store is the ‘Home and Tones’ shop at Hyundai Department Store. Since the number of people redecorating their homes by themselves has increased, SamhwaPaint has been managing a popup store since September 7. Eco friendly paints, as well as paint that turns into a blackboard when applied are exhibited, and paint that can be mixed on-site through toning machines, are drawing the attention of consumers.

The ’99 Avant’ popup store sells the creations of young artist Han Seung-woo. Hyundai department store officials say that the popup store is gaining positive reaction from customers as they can communicate with the artist in person.

Shinsegae department store made space on its sixth floor just for popup stores. Many brands including whiskey brand Balvenie’s ‘craft lounge’, shoe care brand ‘Resh’, and BMW’s Minicars and bicycles have all opened popup stores at the location.

Shinsegae officials mentioned that the sales of popup stores are threatening sales at official stores. “Now, already existing brands are also using popup stores as a method to introduce their new products. Department stores are also benefitting from the popup stores because various brands can be presented so customers have no time to be bored.”