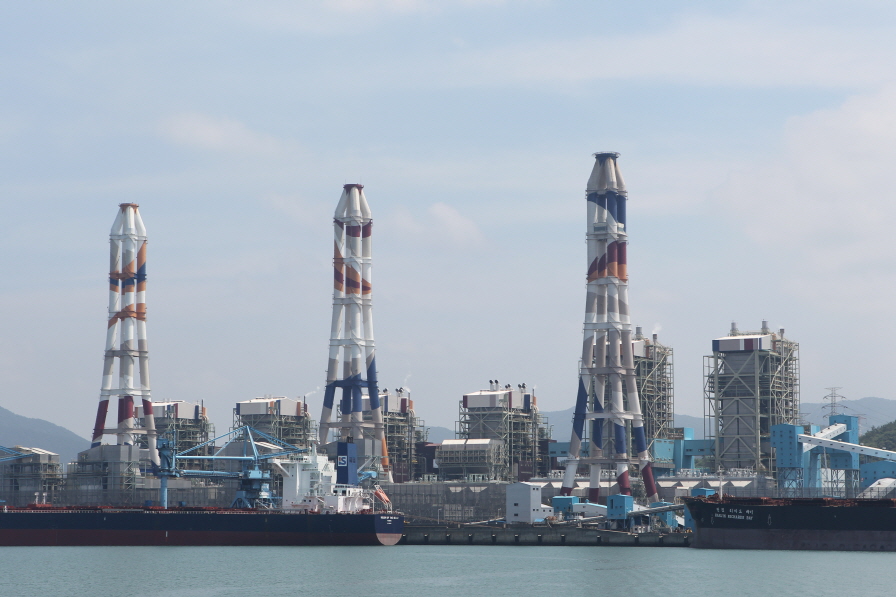 Under the order, eight coal fired thermal power plants that are aged 30 years or older will be closed for 30 days starting June 1, according to the presidential office Cheong Wa Dae.

Coal burning is a key source of emission of fine dust, which coupled with yellow dust largely originating from China, is increasingly becoming a health hazard here.

Currently, there are 10 coal fired power plants in the country, but two of them have been excluded from the temporary shutdown this year due to a possible shortage of power supplies in areas they are located, a Cheong Wa Dae official said.

However, starting next year, all 10 aged thermal power plants will be ordered to close for four months from March each year.

“The president plans to (permanently) close all 10 aged power plants within his term and do it as soon as possible,” Cheong Wa Dae said in a press release.

Moon’s executive order came as he visited a Seoul elementary school for a special class on fine dust pollution.

The president said his government also planned to set up fine dust detectors at 11,000 schools throughout the nation, enabling them to check the level of possibly hazardous particles in their locations and determine whether to allow outdoor activities.

The president noted the measure will cost about 60 billion won (US$53.4 million).

“There are times when a high level of fine dust may prevent physical education classes being held outside. The government will take steps to enable PE classes to be held indoors under such conditions. It will work to install an air purifier in every school gym,” he told the class.

Kim Su-hyun, the chief presidential secretary for social affairs, said the shutdown of the 10 coal fired power plants may help reduce the output of fine particulate matter by up to 2 percent, noting there were 59 coal power plants said to account for about 14 percent of all fine dust emissions here.

In terms of economic impact, the chief secretary claimed the temporary shutdown will have little or no impact on the country’s overall power supply, noting they could easily be replaced by more costly but less polluting LNG power plants, mostly owned by private power suppliers.

The purchase of electricity from private generators could push up the average cost of power generation by 0.2 percent, he said, but insisted the increase in price would only be temporary and that the state-run Korea Electric Power Corp. (KEPCO) could easily bear the cost, at least for now as the temporary shutdown will only last one month.

“The problem will be next year when the 10 coal power plants will be shut down for four months each year. We will come up with ways to keep prices intact,” he said.

The presidential office noted the 10 power plants had a combined generation capacity of 3.3 gigawatts in 2015. The tally accounted for about 3.4 percent of the total capacity in the same year, according to KEPCO.

However, the shutdown of the coal fired power plants comes in addition to the proposed closure of aged nuclear reactors, which will inevitably and permanently reduce the country’s overall generation capacity while pushing up electricity rates.

Moon has promised to scrap existing plans for up to six new nuclear power plants and also shut down aged reactors, starting with the Wolsong No. 1 Reactor, whose lifespan has been extended to 2022 after its initial 30-year cycle expired in 2012.

When asked what will permanently substitute the nuclear reactors and the 10 coal fired power plants, Kim again said the government will have to come up with a more detailed plan for preventing a possible shortage of power while keeping the electricity price at bay.

Currently, there are 22 nuclear reactors in operation here, generating about 30 percent of the country’s total power supply.