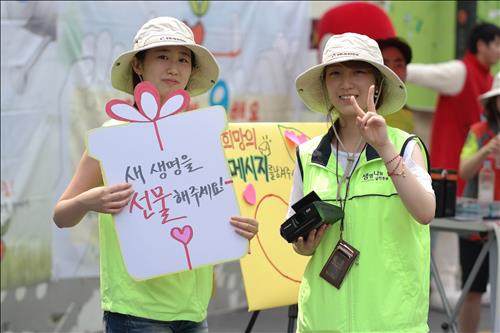 SEOUL, Feb. 20 (Korea Bizwire) — A multitude of Korean religious bodies have started various campaigns to spread the culture of organ donation among Koreans.

There was a dramatic increase, in 2009, of individuals submitting their wish to donate their organs to Catholic NGO One-Body One-Spirit Movement’s organ donation program, according to One-Body One-Spirit’s report on February 19. In 2009, Cardinal Stephen Kim Sou-hwan, former Archbishop of Seoul, inspired Koreans right up to his final moments by leaving his corneas to two people.

To reverse this trend, Catholic and Buddhist religious bodies in Korea are joining together to conduct awareness campaigns.

The Korean Catholic Organ Donation Network and One-Body One-Spirit jointly started a campaign for organ donation on February 18, while the Buddhist organization Life Share Agency (SaengMyeongNaNeum) is also conducting a campaign to attract 1,000 Buddhist monks as future organ donors for this year.

The number of people who submitted their wish to be an organ donor to the agency has reached 6,420 since 1994.