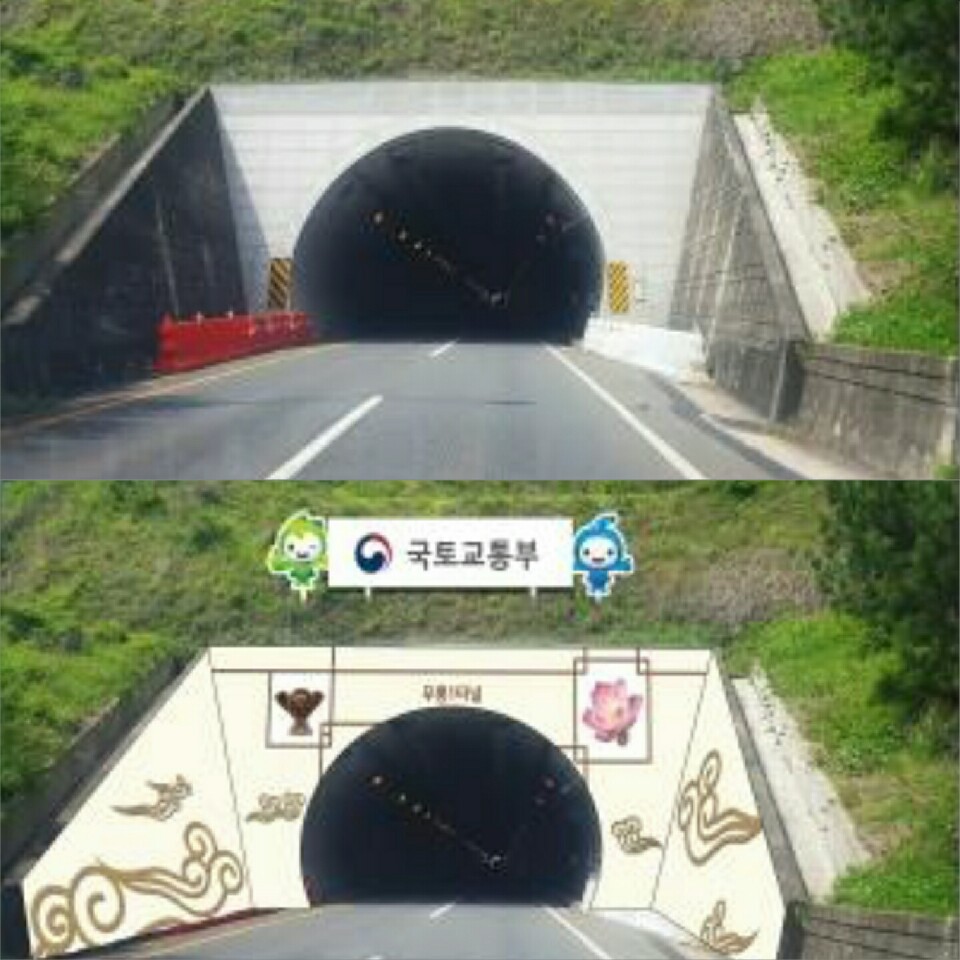 Model image of Mureung Tunnel I, before (top) and after. (image: Busan Regional Construction Management Administration)

BUSAN, Sept. 8 (Korea Bizwire) – In an effort to beautify its road facilities, the JinYoung National Territory Management Office (JNTMO) of the Busan Regional Construction Management Administration announced Wednesday that it will launch a program to renovate structures such as tunnels and bridges using a technique called “Story Doing”.

Story doing is a concept that “realizes a story”, by transcending the idea of storytelling. And in the case of the JNTMO, the endeavor will promote regional culture, history, and products by establishing something that creates a positive image of different areas.

The office will begin its venture this year with tunnels located in Haman County and the Gimhae region.

Designs of watermelons (Haman’s regional produce) and Ara Gaya lotus flowers and leaves will appear at the three Mureung Tunnels (I, II, III) on National Route 5 near the county, which run for 2.1 kilometers. Ara Gaya was a city-state kingdom in the Gaya confederacy, a site that is now Haman.

On National Route 14, near Gimhae, the three (I, II, III) Gimhae Tunnels (4.4 kilometers) will feature murals of earthenware and accessories from Geumgwan Gaya, the ruling city-state of the Gaya confederacy, to promote Gimhae’s historic values during the Three Kingdoms Period in Korea.

“We’ll be imprinting our road structures with designs representing regional culture and history, to introduce our cities and counties to motorists,” said a JNTMO official. “We’ll expand the use of story doing to other road facilities in our jurisdiction after monitoring the results and feedback (for the new projects).”

Meanwhile, the office also intends to improve the safety of its facilities. The Mureung I, II, and III Tunnels will have their sodium-vapor lamps replaced with LED lights for a safer and more pleasant road environment, whereas the Nakdong (1,422 meters) and Naeseo (2,018 meters) Bridges on National Route 5 will be equipped with new delineators to better prevent night-time car accidents.