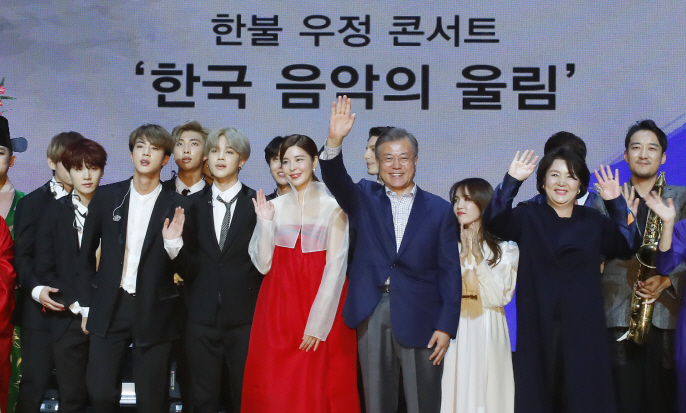 PARIS, Oct. 14 (Korea Bizwire) — South Korean President Moon Jae-in received possibly the most enthusiastic welcome he has ever enjoyed from a foreign population Sunday when he hosted a cultural event to mark his trip to France that offered a rare performance by famous South Korean boy group BTS.

Some 400 French officials and fans hailed both Moon and BTS in the event held in the heart of Paris to celebrate Moon’s four-day state visit that began Saturday.

The special appearance of BTS came about a week before the septet was set to stage its own concert in France on Friday as part of its ongoing world tour that will also take the band to the Netherlands, Germany and Japan.

“The South Korea-France friendship concert was designed to help further expand cultural exchanges between South Korea and France on the occasion of President Moon’s trip to France and to create a friendly environment between the two countries,” Moon’s presidential office Cheong Wa Dae said earlier.

The nearly two-hour concert also consisted of performances by other Korean artists.

Those invited to the event included some 100 fans of “hallyu,” or the global boom of Korean pop culture.

Moon is scheduled to hold a bilateral summit with French President Emmanuel Macron on Monday.

He will head to Italy the next day to make an official visit to Rome and the Vatican.

The South Korean leader is currently on a four-nation tour that will also take him to Belgium and Denmark.