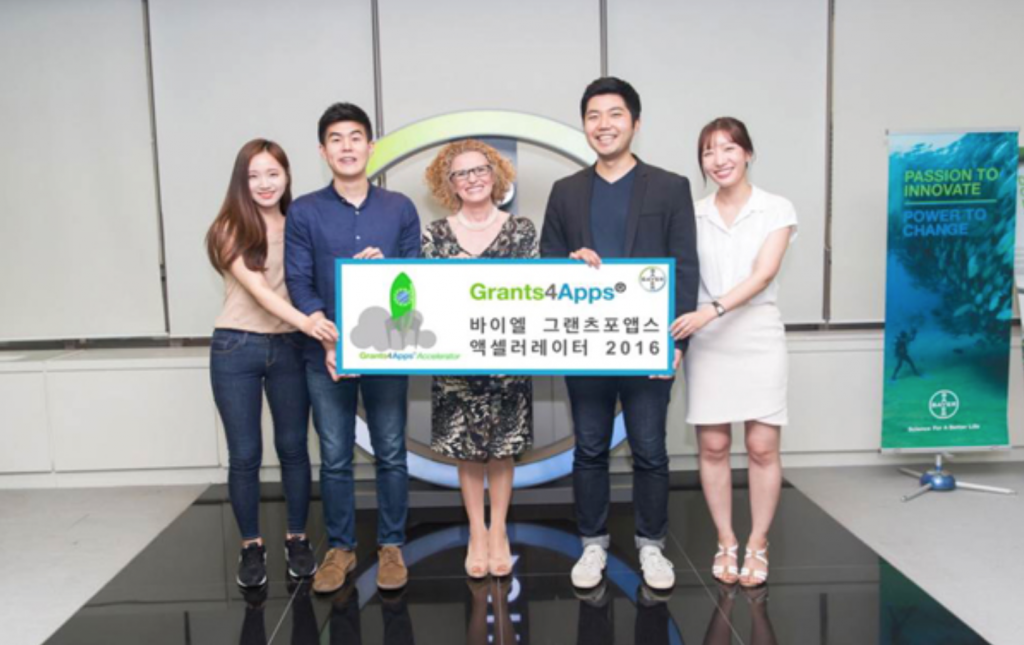 “Bayer is a pioneer in women’s health,” said Seok Jun-woo, CEO of Vital Smith. “With its 153 years of expertise in medical science and technology, we expect this opportunity to be of tremendous help to the development of b bless.” (image: Bayer Korea)

Vital Smith presented ‘b bless’, a smart ovulation predictor that helps women identify their fertile window using saliva. By affixing a strip of film with saliva to the ‘b bless’ device and attaching it to the camera, results can be viewed on a smartphone’s screen, said the company. The key technology was the analysis of salt crystals in the saliva, which differ during various stages of the menstrual cycle, using a smartphone camera.

The judges also saw highly of the fact that Vital Smith made the predictor in the form of a lipstick, making it more portable.

Over 400 project ideas from 66 countries and 170 cities were submitted to this year’s Grants4Apps, which marked its third anniversary.

“Bayer is a pioneer in women’s health,” said Seok Jun-woo, CEO of Vital Smith. “With its 153 years of expertise in medical science and technology, we expect this opportunity to be of tremendous help to the development of b bless.”

The three other winning teams were from Ghana, which presented telehealth technology Oasis Websoft; Germany, with AI healthcare project xbird; and Hungary, which also introduced an AI-based project specific to oncology.

“We’re proud to have a Korean startup among our finalists,” said Bayer Korea CEO Ingrid Drechsel. “We’ll continue our domestic support of such enterprises so more talented Koreans can make their way into the international market.”

The four winning teams will be provided with exclusive office space at the Bayer Pharmaceuticals headquarters in Berlin for the next 100 days, during which they’ll receive business and technical mentoring from various industry experts. They’ll also be given the opportunity to meet with venture capitalists and investors, on top of 50,000 euros in support funds.