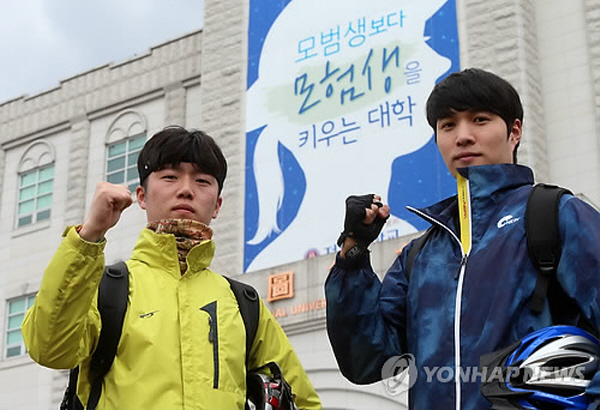 SEOUL, Apr. 16 (Korea Bizwire) — Two Korean university students are going on a daring adventure to traverse the North American continent by bicycle, without a single penny.

Yi Woo-Chan and Jung Jun-Ho, both 26 years old and majoring in International Trade at Chonbuk National University, will start their 6,000 kilometer-long journey in New York and cycle to Los Angeles over a period of 90 days. They will travel only by bicycle through 72 American cities.

They won’t spend a penny during their adventure, although they will be carrying 1 million won (US$ 918) as a safety precaution.

How will that be possible? The two men gathered all the help they could get, by contacting tour agencies, magazine publishers, international and domestic traveler communities and bicycle communities.

Through their genuine efforts, they earned two sponsorships and help from two communities. A Korean tour agency provided airline tickets, while a Korean bicycle magazine supported them with two bicycles. An international traveler community and a bicycle community will provide accommodations and meals for the journey.

Yi and Jung have decided to go on this quest to inspire their peers about choices in life. They wanted to show that there are always choices other than seeking a well-paid job and studying. They have never trained as cyclists, and have never been to the U.S.A. Everyone around them, including their families and friends, tried to talk them out of their trip, but to no effect.

Jung said that they had met a lot of people who have succeeded in similar quests, and have made plans down to the very last detail about their 7 week journey to make the adventure safer, which was a concern for their families. The two men are training every day, and making final adjustments to their schedule one month before their departure.

Yi said that although he once crossed South Korea on foot, and Jung climbed to the top of Mount Kinabalu, the highest mountain in South Asia, they have never experienced a long-term journey like the one they are about to undertake. He added that they are only expecting to learn from their experience, regardless of whether they succeed in or not in their quest.

The two men plan to embrace other challenges after their journey, in order to follow their hearts and inspire people.