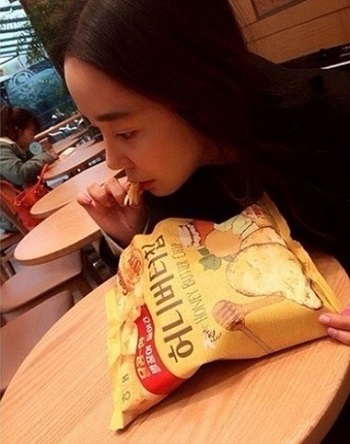 Some Korean celebrities who managed to get the snack posted photos of themselves grabbing the item on their Twitters. (image: Soy Instagram capture)

SEOUL, Nov. 22 (Korea Bizwire) – A Korean-style potato chip product sweeps South Korea. It is so delicious that a huge number of snack lovers crave for it. It is almost impossible to get one, however, as demand is substantially exceeding supply.

The potato chip called “Honey Butter Chip” launched in August hit the record of 10-billion-won sales only within three months. In the Korean snack market, one-billion-won sales in a month are considered a big success, which means that the new potato chip is now hitting the jackpot in the market.

Surprisingly, the product has not been advertised at all. Consumers who have already tasted it spread it through social networking and it went viral in a moment. As it became hard for customers to get one, some quick people who already grabbed and piled a bunch of the item resold them on a website for used goods at a higher price. They demanded up to 5,000 won per bag of chips, three times higher than the original price of 1,500 won.

Some people posted a recipe for the chip for those who haven’t tasted it yet. According to their recipe, one can make a DIY-version of Honey Butter Chip with ordinary potato chips by adding butter and honey to them. Some Korean celebrities who managed to get the snack posted photos of themselves grabbing the item on their Twitters.

Jung Myung-kyo, the developer of the sensational snack, attributed the unprecedented popularity to its taste. According to him, Korean people prefer sweet tastes to salty ones. But chips currently available are invariably salty. So he came up with the snack by eliminating salt and instead adding more sweetness with butter and honey.

Thanks to the fever, the stock price of Crown, the manufacturer of Honey Butter Chip, has increased for seven consecutive days. On November 21, it was closed at 283,000 won, up 9.69 percent from the previous day.