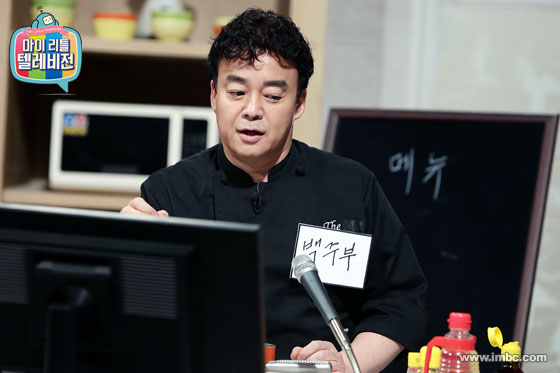 “My Little Television,” endearingly known as “Maritel” here, features celebrities producing their own segments and talking to viewers in real-time in an online chat room. (image: MBC)

SEOUL, July 16 (Korea Bizwire) — With the rise of “My Little Television” — an MBC variety show that communicates with its viewers via a live chat room — more TV networks are getting on the “real-time” bandwagon.

“My Little Television,” endearingly known as “Maritel” here, features celebrities producing their own segments and talking to viewers in real-time in an online chat room.

Baek Jong-won, a celebrity chef who is married to an actress, is among the most popular cast members, introducing absurdly simple yet delicious recipes for some of Koreans’ favorite dishes.

Producer Lee Wook-jung of KBS 2TV’s “Wook’s Food Odyssey” will now try to steal some of that spotlight.

This Saturday at noon, Lee will make shakshuka, a Middle Eastern dish using slow-cooked tomatoes, poached eggs and spices, and his viewers will be able to comment or ask questions in a real-time chat room during the show.

Another program, a new show called “Make a Wish” in rough translation, on cable channel Olive TV will try to go a step further.

In its pilot episode scheduled for 8:40 p.m. Thursday, show host Jun Hyun-moo, Key from boy band SHINee and chef Raymon Kim will set out to cook whatever dish the viewer with the most convincing story wants and deliver it to that viewer all in one broadcast.

The idea of real-time interaction hasn’t been confined to just cooking shows either. A KBS 2TV fashion program “A Style For You,” which concluded last month, also featured live chat rooms with viewers.