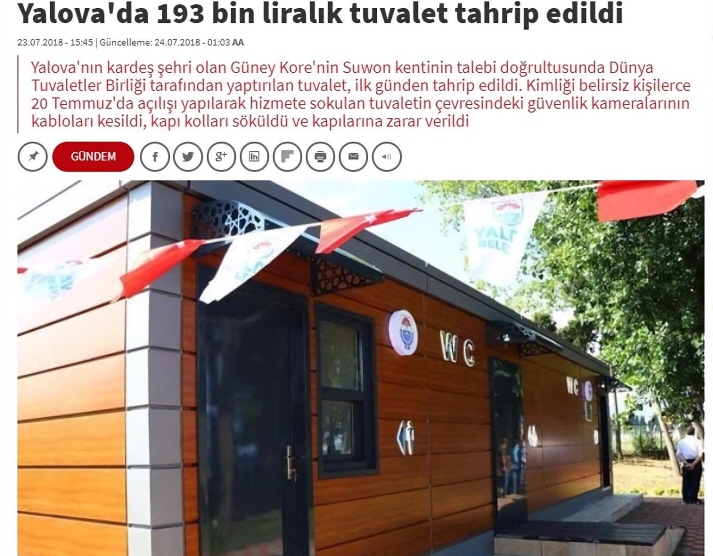 Turkish press reported that the “Suwon public toilet” that was installed in the coastal Turkish city of Yalova was purposely damaged almost immediately after the ribbon-cutting ceremony that celebrated its opening. (image: Yonhap)

SEOUL, Jul. 25 (Korea Bizwire) — A public washroom that was built in a northwestern area of Turkey funded by a Korean municipal government was vandalized just days after it opened to the public.

Turkish press reported yesterday that the “Suwon public toilet” that was installed in the coastal Turkish city of Yalova was purposely damaged almost immediately after the ribbon-cutting ceremony that celebrated its opening.

According to Yalova City Hall, an unidentified vandal cut the cables to the security cameras before inflicting significant damage to the interior and exterior of the public washroom.

The public washroom was funded by the government of Suwon, a sister city of Yalova. Suwon carried out the project with the help of the World Toilet Association (WTA).

After the washroom’s official opening, the city of Suwon publicized the installation which, according to official press release reports, cost 51 million won to build and boasted a size of 50 square meters including a nursing room for mothers.

Kim Young-chel, the Secretary General of the WTA, was present at the ribbon-cutting ceremony held on July 20 alongside Hong Kee-won, the Korean Ambassador to Turkey, and officials from the Suwon government.

Vefa Salman, the current mayor of Yalova, said that the destruction of a gift from a sister city was “embarrassing.”

Kim, a Korean student studying in Istanbul, speculated that while Turks usually fear authorities, the washroom may have been a target because its construction had been funded by a foreign entity.

Meanwhile, Koreans living in Turkey have questioned the effectiveness of other sisterhood projects that invite Turkish officials to Suwon and vice versa.

Kim questioned the motive behind Suwon’s funding of a public toilet in a foreign country, saying that it was unclear why Suwon decided to fund such a facility in Turkey, a nation with an established economy and a member nation of the OECD.